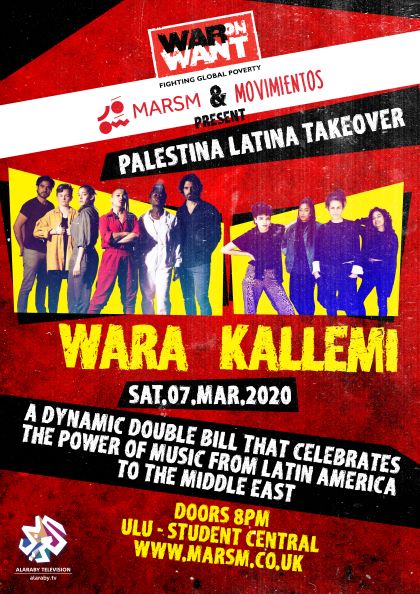 A dynamic double bill showcasing some of the most powerful Latin American and Palestinian acts on the scene. From piercing Cuban timba to unapologetic Arabic hip-hop, dembow and folklore, this electrifying lineup celebrates the revolutionary power of music from Latin America to the Middle East.

WARA
Playing deep into the rhythms of urban Latin America, Wara is an award-winning musical outfit that fuels its signature sound with bass-heavy dembow, biting synths and hip-hop.

Led by producer and composer Eliane Correa, the band formed in 2010, and has since become known for powering a Latin American narrative that celebrates regional music cultures such as mambo and cumbia. With backgrounds spanning from Cuba to Congo, Venezuela and Chile, Wara’s performances are a musical homage to their heritage; provocative and potent, a Pan-Latin powerhouse that’s paving a way of its own.

Starting as an exchange project initiated by Kaserne Basel in 2018, the group first met in Ramallah and worked intensely focusing on a one-time show. Yet as soon as they finished their performance in Basel, it was clear to everyone that the project would not stop here.

This evening is sponsored by War on Want & Alaraby TV.
War on Want will be showcasing their work fighting the root causes of global poverty, inequality and injustice. Join the fight today.