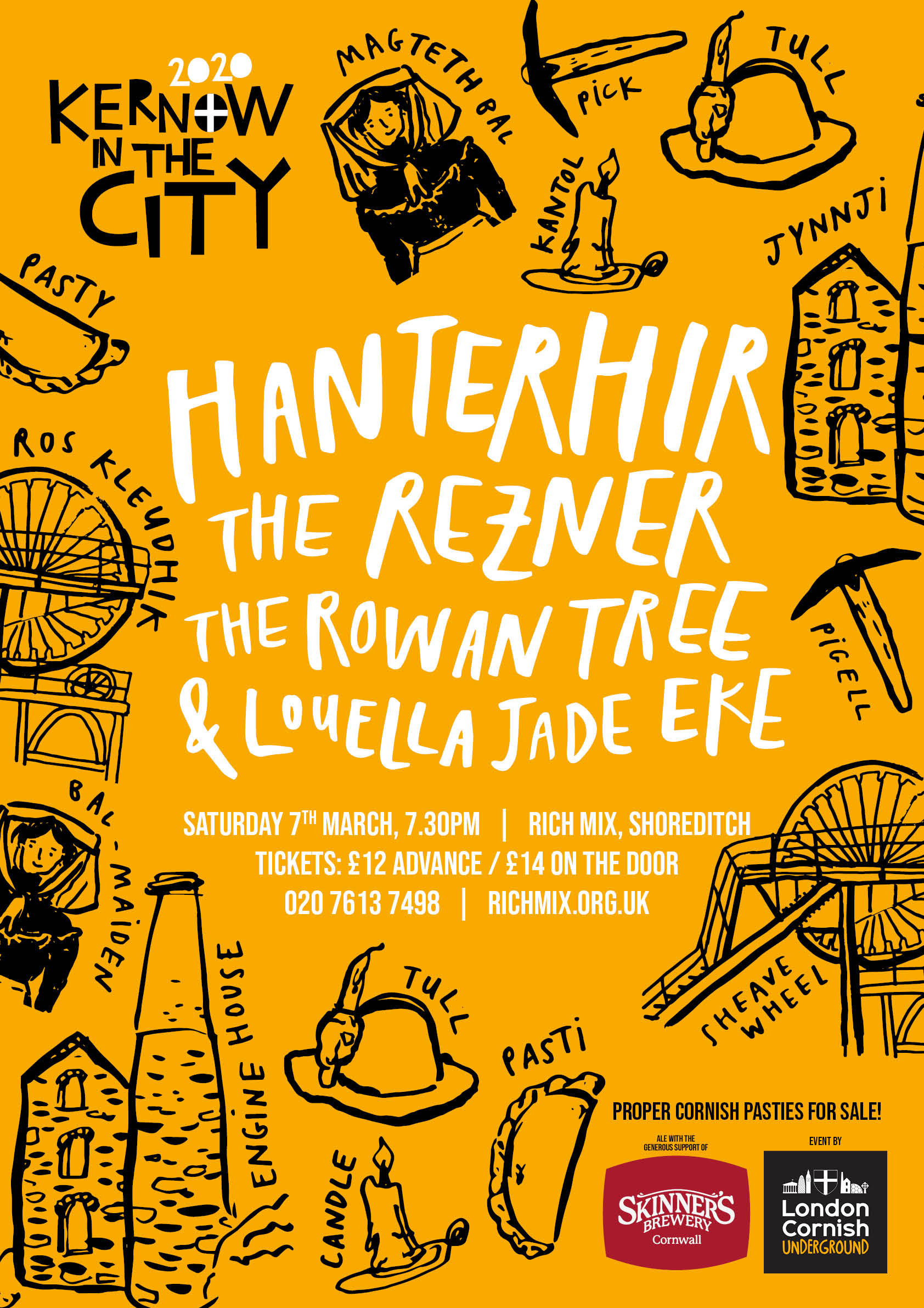 Now in its eleventh year, Kernow in the City will return this Pirantide with London’s annual mini-festival of Cornish contemporary music and culture. Once again, the Rich Mix venue in the heart of Shoreditch plays host, with an eclectic mix of Cornish pop, folk and rock music, comedy and poetry in celebration of St Piran’s Day, Cornwall’s patron saint.

For our headline act this year, stand by for the maelstrom that is HANTERHIR – the psyche-folk rocker/whatevers return to the Rich Mix off the back of their critically-acclaimed album ‘The Saving of Cadan’. They’ve been described as ‘a cacophony of Celtic wildness, granite and storms roaring across the grooves, sung in English and Cornish in an overwhelming Atlantic tsunami of sound’ – sounds about right to us!

Conquering just about every corner of the UK, THE REZNER have burst onto the scene emphatically over the last 12 months. These guys are quickly snowballing into one of the most exciting groups around. It’s easy to hear why they’ve had impressive early radio support from the likes of Huw Stephens on BBC Radio 1. The Rezner overflow with attitude, aggression and spirit, with addictively catchy vocal hooks. After having honed their performance at the likes of Leopallooza, Port Eliot, Isle of Wight, Burning Man, Beautiful Days, Boardmasters and The Great Estate festivals, we are delighted to have them on our KITC 2020 line-up.

THE ROWAN TREE is an award-winning folk band, honoured for their outstanding contribution to Cornish music and culture. Formed for the 2017 Pan Celtic festival encompassing traditional music predominantly from Cornwall and original pieces with a Celtic feel, they have a unique and engaging sound. For KITC 2020, the band will showcase their multi-media Arts Council-funded project, ‘Kolar’s Gold’ telling the story of the Cornish mining community in India through collaboration with musicians from across the world. With their second album coming later this year, expect to hear more songs in the Cornish language.

Known across Cornwall for her sweet honey melodies with a whiskey kick, we are delighted that LOUELLA JADE EKE will open Kernow in the City 2020 this year. With songs reaching from folk to blues to rock and roll, her performance is a roller coaster of emotion and feel. We think Louella’s stunning voice and her phenomenal ability with the guitar will have the hair on the back of your neck standing up.

The night will be fuelled with ales from Skinner’s Brewery and Cornish pasties from Ann’s Bakery in Helston and will include a rousing collective ‘shout’ of Trelawny and all your favourite Cornish pub songs, led by the Wrecker’s Wednesday team, KitC’s monthly social night spin-off event. So, if you’re in London and you love Cornwall, come one and all to celebrate our national day at Kernow in the City on March 7th.