Imperial Lates was an event in London that took place to showcase how smart technology combined with fashion could create something wonderful. It was an event open to public. In an article written by Bernadeta Dadonaite, School of Professional Development on the Imperial Collage London Website she states that researchers from across the College showcased their own smart designs of wearable technology and intelligent clothing.

Here is her article:

Just as London was celebrating London Fashion week, Imperial researchers brought their own wearable designs out onto the catwalk. In this week’s Imperial Lates: Smart Fashion event, researchers from across the College showcased their own smart designs of wearable technology and intelligent clothing.

“Innovation is all around us, you just got to find it”Anisha KanabarStudent

Visitors to the free evening event were able to talk to the researchers and try out some of the designs themselves. Among the variety of exhibits and workshops there were children’s clothes that grow with an infant, tattoos that sense how dehydrated you are, new gloves for future astronauts and a discussion on how technology can make the fashion industry more sustainable.

Imperial graduate Nate Macabuag showed his entrepreneurial spirit by representing a start-up company, called Mitt, and its innovative prosthetic designs. The goal of Mitt is to provide user-friendly and affordable prosthetics for everyone in need.

Current prosthetic limbs available through the NHS have several design flaws – not only are they extremely expensive but they often are very uncomfortable to wear. The latter issue also means that ultimately around a third of prosthetic limbs given out to amputees are never worn. Mitt’s solution to the problem is to go directly to the amputees and ask what they want from a prosthetic limb.

Such a direct approach led Nate and his cofounder Ben Lakey to make a prosthetic that is designed with a user in mind. The newly designed prosthetics are not only intuitive and simple, but also comfortable to wear and are based on modular parts that can be interchanged using simple magnetic attachments. They weigh just a few hundred grams and currently have at least eighteen different attachments that can be used for different tasks – anything from writing to wine drinking. Furthermore, the low cost of the design allows Mitt’s prosthetics to be sold at a price that subsidises them to the people who are the least able to afford it.

As Nate put it: “We think about prosthetics just as we would about a pair of sneakers, they have to be comfortable to wear and affordable, so that people could and would want to use them”. Keep an eye out for Mit’s upcoming launch to the wider public later this year.

When Anisha Kanabar noticed her grandmother wobbling from side-to-side when she walked, she realised that there may be a link between the traditional sari garment that she wore and the deteriorating musculoskeletal problems that her grandmother was experiencing. Walking in saris requires a slight forward kicking action to prevent the wearer from falling over the garment. But the kicking action can cause the development of bad posture.

From then on it was Anisha’s mission to recreate the traditional garment in a way that maintains the tradition but also prevents the development of bad posture practices that can ultimately lead to larger issues such as osteoarthritis. Anisha has designed a new sari that has a structured insert inside it and makes the fabric adapt to a person’s movement, removing the need to kick the garment.

Anisha’s grandmother was initially sceptical about trying on the design, but now very much appreciates the help, moreover the reinvented sari is also quite popular among the younger people due to its simplicity and convenience.

“As much as this is about helping  older people, you don’t want to scare young people from wearing the garment as well, you want them to be able to wear it both comfortably and proudly,” said Anisha. During the Lates event Anisha was also approached by a visitor who works as a costume designer, who thought that the design could potentially also work for designing more comfortable theatre costumes too.View image on Twitter

We are live at tonight’s fashion inspired #ImperialLates – here is #ourimperial @ImperialDyson and @IDE_RCA alumni @Anisha_94 taking to the public about her re-engineered saree to allow easiest movement123:14 AM – Feb 22, 2019See Imperial Spark’s other TweetsTwitter Ads info and privacy

Speaking about where she finds inspiration for her work, Anisha added: “Innovation is all around us, you just got to find it.”

While gloves may not seem like the type of clothing that needs much innovation, the researchers from Imperial’s Hamlyn Centre showcased their improved designs on gloves that many of us have imagined wearing in our childhood –ones that come with a spacesuit.

One of the issues with the current model of a space glove is that, during a spacewalk, it inflates and becomes very difficult to operate and move. Inflated gloves create a lot of resistance, so astronauts waste a lot of energy just moving their fingers and a simple job of tightening a screw can take hours to do.

Imperial researchers have designed a glove that has sensors placed on a person’s fingers inside it. The sensors relay finger movement information to an exoskeleton that goes with the spacesuit, which in turn can provide help with the action that is being performed.

Another issue with the current version of space gloves is that the gloves themselves are very thick, making an astronaut’s sense of touch almost absent. To improve the tactile senses of the wearer, the new version of the space glove has sensors on its exterior that relay touch information through small vibrations, providing a new feedback loop to the astronaut. Who knew that gloves can be so complicated?

New use for gyroscopes

While space gloves are perhaps not something that most people will see lying around often, a GyroGlove might one day be found in many households.

GyroGlove is a creation of Imperial’s medicine graduate Dr Faii Ong and it uses simple principles of a gyroscope to cancel tremors in people’s hands. Gyroscopes are devices that are used to maintain an orientation of an object. These days gyroscopes are used extensively in the industry for aircraft and ship navigation and there is likely a gyroscope inside your pocket too –  if you carry a smartphone.

Dr. Faii Ong’s medical background has inspired him to create hand-stabilising gloves in the hope that they would help Parkinson’s patients to overcome the symptomatic tremors. The GyroGlove looks like a normal glove with a small cylinder on its back, in which a gyroscope that stabilises hand movements is placed. GyroGear, a company that makes the GyroGlove, is now finalising all the required medical approvals and will soon take the GyroGlove into clinical trials. Outside its application for Parkinson’s patients, GyroGlove could potentially one day be used in other fields that require precise hand movements, such as surgery or elite sports. 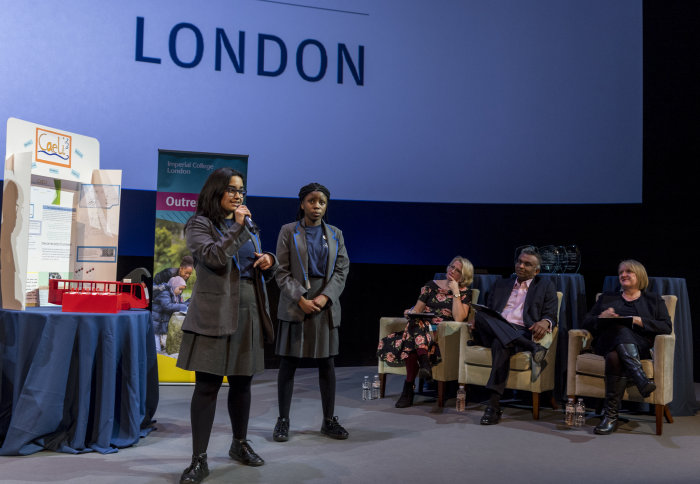 In an article written by Joanna Wilson on 15th February, she reports that Young people across the capital were tasked with creating innovative solutions to…