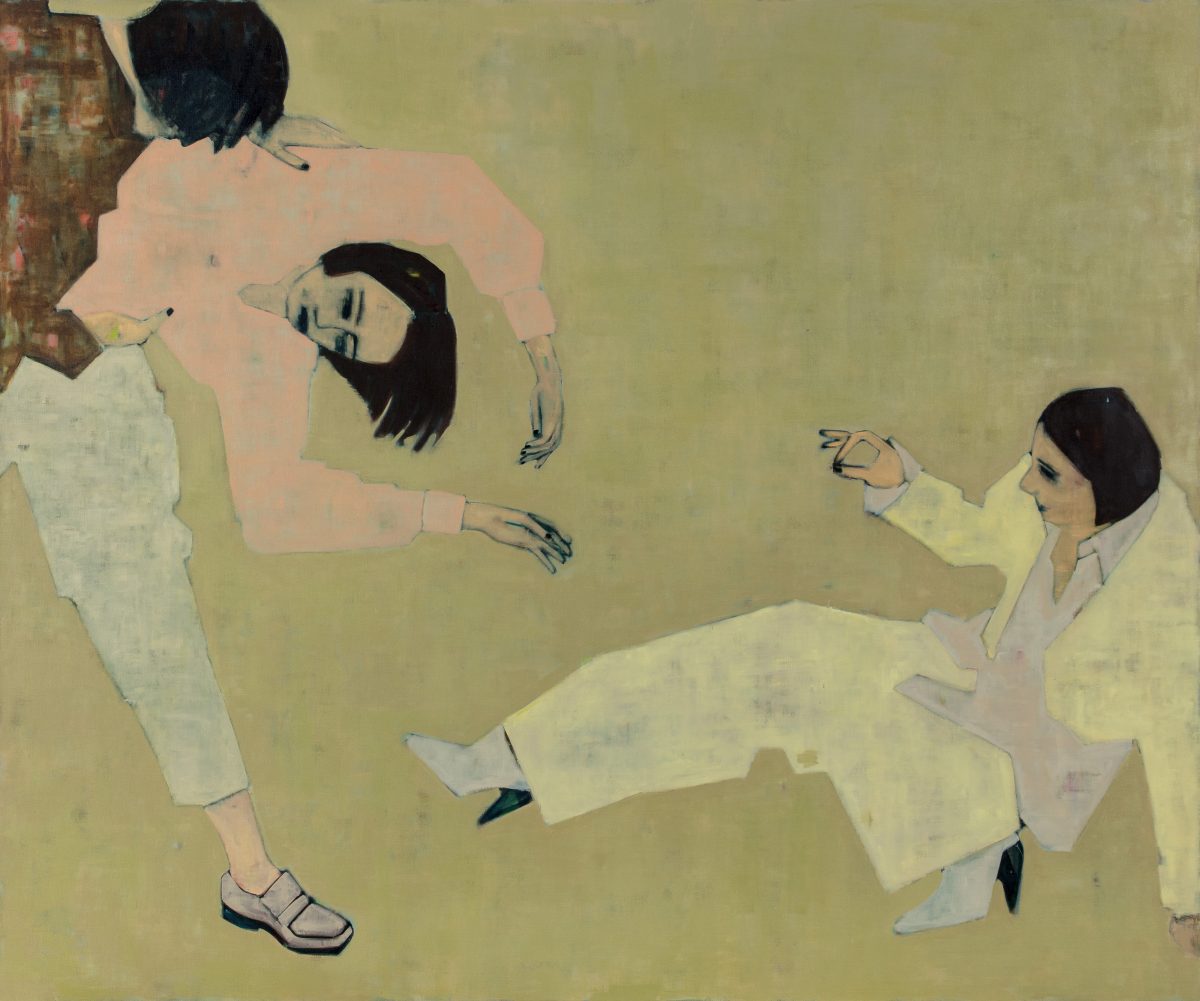 Gargantuan women appear suspended in soft coloured, bruising backgrounds, their bodies twisted in acrobatic movement and dynamic gestures. These are the works of British artist and former
fashion designer Sara Berman whose practice explores the depth and distortions of materiality in relation to how we view and inhabit the body. She focuses specifically on female experience and is
deeply informed by her intimate understanding of fashion and textiles in terms of how we wear, understand and perceive clothes.

Taking Space, Berman’s first solo exhibition with Kristin Hjellegjerde Gallery presents a new collection of gentle and forthright, whimsical and imposing paintings expressing the complex tensions of womanhood while also gesturing towards a joyous sense of liberated physicality. Each painting begins with the motif of the harlequin.

Traditionally, the harlequin is portrayed as male — a sly but lovable joker, dressed in a bright diamond-patterned costume. However, the same character as a woman becomes a trickster whore. While this articulates a familiar double standard, Berman’s interest lies in how external appearances might impact our perspective of self and others.

She begins by stretching the canvas very tightly over the frame before painting the distinctive pattern of the harlequin’s costume as a base layer onto the canvas, which becomes “a map” or “the soul” of the composition. She then works over the pattern with further layers of paint, scraping, wiping and pushing to create a kind of bruised surface through which the outlines of the diamond shapes are illuminated by light. “The colours I choose are generally soft and gentle,” she says, “but the making process is very physical, almost violent. I feel, increasingly, as I get older that being a woman is a violent thing.”

The shapes of the women are generally based on photographs of friends or self-portraits for which Berman uses furniture and, more recently, acrobatic equipment to help her achieve contortion and elevation. Regardless of the original models, there is a strong likeness between the figures, as if they are multiple iterations of the same person. “At a certain point, I realised that I didn’t want to get bound up in the who or the what,” explains Berman. “Self-portraits are the easiest way for me to not deal with the specifics of identity. They’re simply women in space. By painting them as myself, it’s a way of avoiding objectification.” Instead, personality and emotion are conveyed through the figures’ physical gestures in space, and the textures and shapes of their clothing, as well as the application of the paint itself.

While the compositions might appear precise and simple from a distance, closer inspection reveals markings that imply the weaving of threads; subtle imperfections where the colours bleed out of the lines or splashes of paint are flicked across the canvas; and surprising pops of neon colour that suggest a pooling of light or passing shadows.

“These paintings are about the sensation of being in the body,” says Berman. “I use clothing intentionally as space which contains the body, a place for it to exist within a holding space.” The clothing is usually androgynous in style, based on pieces by known fashion designers and vintage finds. Still, through the process of painting, the artist flattens the garments, removing the folds and seams of the fabric so that it becomes a rigid shape that simultaneously contains and abstracts the body. This is perhaps most obvious in the painting entitled Freefall, in which the figure is caught moving through the air. While we might recognise and relate to the physical sensation of the movement, the body itself is obscured by the clothing’s colour and structure, and the lack of surrounding context creates an almost surreal effect. Similarly, the women’s hands are often painted out of proportion to appear huge and claw-like, gripped in tension, or delicate and oddly small.

The fingernails are always painted black, creating a striking contrast against the pale, pastel shades and directing our gaze towards a particular gesture. For example, in the painting
Moves, which depicts one woman leaning back against another, the hands articulate a sense of dynamism – the sensation of pushing and pulling, while the figures themselves are relatively static.

The woman at the front has her hands reaching back in a gesture of intimacy, while the other woman’s arm stretches across the canvas as if trying to establish some distance or separation.
The works in the show range in scale. The smaller works contain the figure in an almost claustrophobic frame, which is both uncomfortably tight and curiously intimate, while the large-scale
paintings have a powerful impact on the process of making and the viewer’s bodily relation to the image. Berman was required to use ladders and large brushes to do these larger works,
rendering limbs and faces much bigger than her own. “I want them to feel as imposing as they felt to me,” she says. “These paintings are very much about claiming presence as a person, as a woman.

There’s a slight arrogance to them which I like because taking space is an act of necessary selfishness.” At the same time, the gentle colour palette and playful approach to composition
convey a palpable sense of humour and joy. As Berman’s women boldly tumble across the canvas, asserting their strength and physicality, we are invited to experience a heightened awareness of how we move through and occupy the world we live in.

Emily posted an update 11 seconds ago