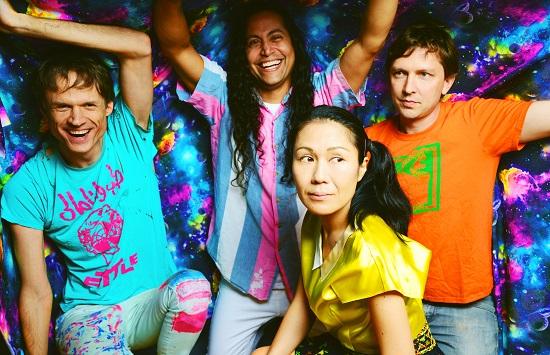 Deerhoof’s latest, Actually, You Can, is a genre-abundant record that uses technicolor vibrancy and arpeggiated muscularity to offer a vital shock from capitalism’s purgatorial hold. The band says, “Think of all the beauty, positivity and love that gets deemed ugly, negative and hateful by the self-proclaimed guardians of ‘common sense.’ We’d hardly be destroying society by dismantling their colonial economics and prisons and gender roles and aesthetics. We’d be creating it!”

SACRED PAWS are a fantastic, intuitive dream punk duo, comprising Eilidh Rodgers of Golden Grrls on drums, and Rachel Aggs from Trash Kit and Shopping on guitar. Raw Soweto high-life riffs and rolling Afrobeat grooves are filtered through post-punk sass and ramshackle K Records charm. It’s an utterly joyous sound, the duo trading giddy melodies and righteous chants over febrile rhythms and chunky, infectious riffage. Rock Action released the band’s debut album ‘Strike A Match’ in 2017 and it received a slew of incredible reviews from the likes of Q, DIY, Clash, Loud & Quiet, The Skinny and was voted Scottish Album of the Year too! In 2019 they followed that up with ‘Run Around The Sun’ (out May 31st on Merge / Rock Action) brimming with upbeat reflections on growing up and looking back.