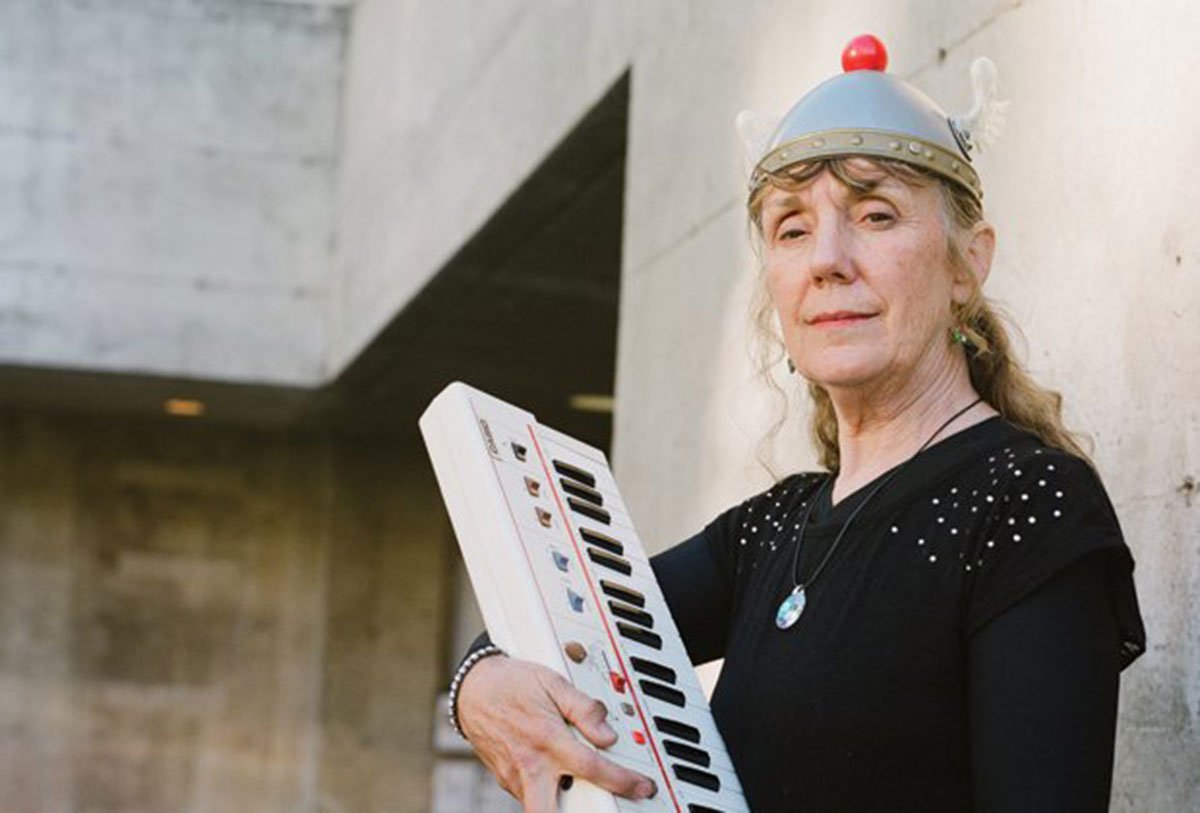 THE SPACE LADY began her odyssey on the streets of San Francisco in the late 70s, playing versions of contemporary pop music an accordion and dressed flamboyantly, transmitting messages of peace and harmony. Following the theft of her accordion, The Space Lady invested in a then-new Casio keyboard, birthing an otherworldly new dimension to popular song that has captured the imaginations of the underground and its lead exponents ever since, with the likes of John Maus, Erol Alkan and Kutmah being devotees. Of her early street sets, only one recording was made, self-released originally on cassette and then transferred to a homemade CD. ‘The Space Lady’s Greatest Hits’ released in 2014 through Night School features the best of these recordings – mostly covers but with some originals – pressed on vinyl for the first time and features archival photographs and liner notes from The Space Lady herself. ‘Greatest Hits’ contains The Space Lady’s personal favourites; her haunting take on The Electric Prunes’ ‘I Had Too Much To Dream (Last Night),’ a frantic ‘Ballroom Blitz’ amidst other reconstructed pop music. Following on from this wonderful record, The Space Lady released a split LP in 2015 with the Burnt Ones on Castle Face records which included her spectral take of ‘Across The Universe’ and a recent LP from 2018 through Mississippi entitled ‘On The Street Of Dreams’.
https://daily.bandcamp.com/features/exploring-the-intergalactic-wonders-of-the-space-lady

ROBERT SOTELO is a mercurial melodist building a resplendent world of pristine DIY pop from the ground up. The Glasgow-based artist’s songs are meticulously crafted, patchworked together with eclectic arrangements and ardent vocal performances. Last year Upset The Rhythm released Robert Sotelo’s vivid new album ‘Celebrant’. ‘Celebrant’ was intended to be and still is to some extent a joyous wedding album (Sotelo is recently married), but in his own words “the pandemic and the death of my aunt Carmen intersected with the original concept so the album is darker than intended in places.” More cinematic and measured than prior albums, Sotelo expounds that “it is purposefully a bigger sounding attempt at my keyboard songs and I felt more ambitious about it in general.” That’s certainly reflected in these twelve sophisticated loops of song, all curiously affecting and catchy, sprinkled with Sotelo’s offbeat musings and keenly accurate observations. Guitars are rarely employed on this record with Sotelo recruiting Iain Mccall, Ross Blake, Celia Morgan and David Maxwell to contribute brass, woodwind, spoken word and acoustic drums respectively. All of these additions blend well with the album’s synthetic core, softening and subtly shaping its pop-first nature into something more nuanced, vulnerable and human.
https://robertsotelo.bandcamp.com/album/celebrant