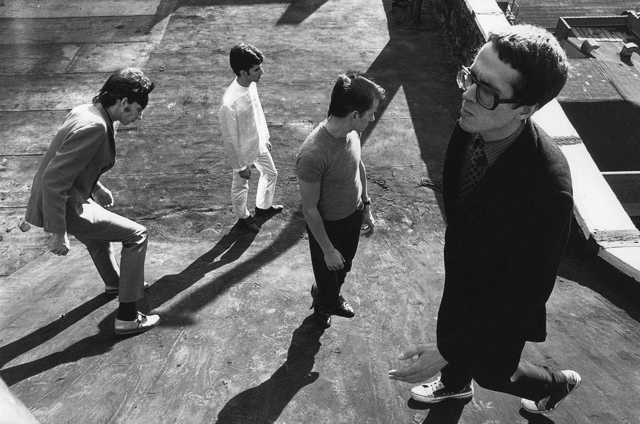 THE MONOCHROME SET are a highly influential English new wave band, originally formed in London in 1978 by Bid (vocals & guitar), Lester Square (lead guitar), and J D Haney (from The Art Attacks, on drums).  In 1979, they signed to Rough Trade and released three singles, “He’s Frank”, “Eine Symphonie Des Grauens”, and “The Monochrome Set”. They released their debut studio album, “Strange Boutique”, produced by Bob Sargeant in 1980. Their classic follow-up album, “Love Zombies”, was produced by Alvin Clark and the band, later that same year.  In 2018, the 40th year since the band formed, their 14th studio album, “Maisieworld” and a box set, “The Monochrome Set 1979–1985: Complete Recordings”, was released. The group’s most recent album ‘Allhallowtide’ was released earlier this year.
http://www.themonochromeset.co.uk/

THE MINDREADERS are Richard Ipaint on vocals and drums, Sexton Ming on vocals, sfx and guitar, and Russ Wilkins on vocals and guitar, with all three on songwriting duty too. Fans of The Pop Rivets, The Milkshakes, The Natural Born Lovers, Rocking Richard, The Delmonas, Auntie Vegetable, The Wildebeests and more will know all about them. Debut album ‘Ban The Mindreader’ was released in 1987 on Russ’ Empire Records label, with some extra gig recordings to bulk it out. Some of the gig recordings also found their way to the Medway Powerhouse compilations on Hangman Records. Fast forward 30 years, Russ and Richard realised they only lived 25 miles apart in Scotland, and now much wiser, a connection was made from Sexton (now also much wiser) who wanted to do something dim and simple. A gig was arranged in Hastings which led on to more gigs! Following on from the gigs, they convened in a garage and recorded some songs over two days onto a Tascam 8 track, 1/2” recorder, playing whatever they felt worked, recording over twenty tracks. The fruits from this labour were released last year by Spinout Nuggets as the LP ‘Continuation’.
https://soundcloud.com/spinoutnuggets/sets/the-mindreaders-continuation

DEE BYRNE & CATH ROBERTS released their first album on Luminous in 2020. Mixed by Alex Bonney, Disembark! is a series of short acoustic improvisations recorded at Gun Factory Studios. Disembark! is a series of short, spontaneous improvisations that explore a dramatic range of textures, whilst maintaining the sense of an ongoing, inquisitive conversation. The recording came about after a series of live duo performances; going into the studio seemed like the next logical step.
https://luminouslabel.bandcamp.com/album/disembark