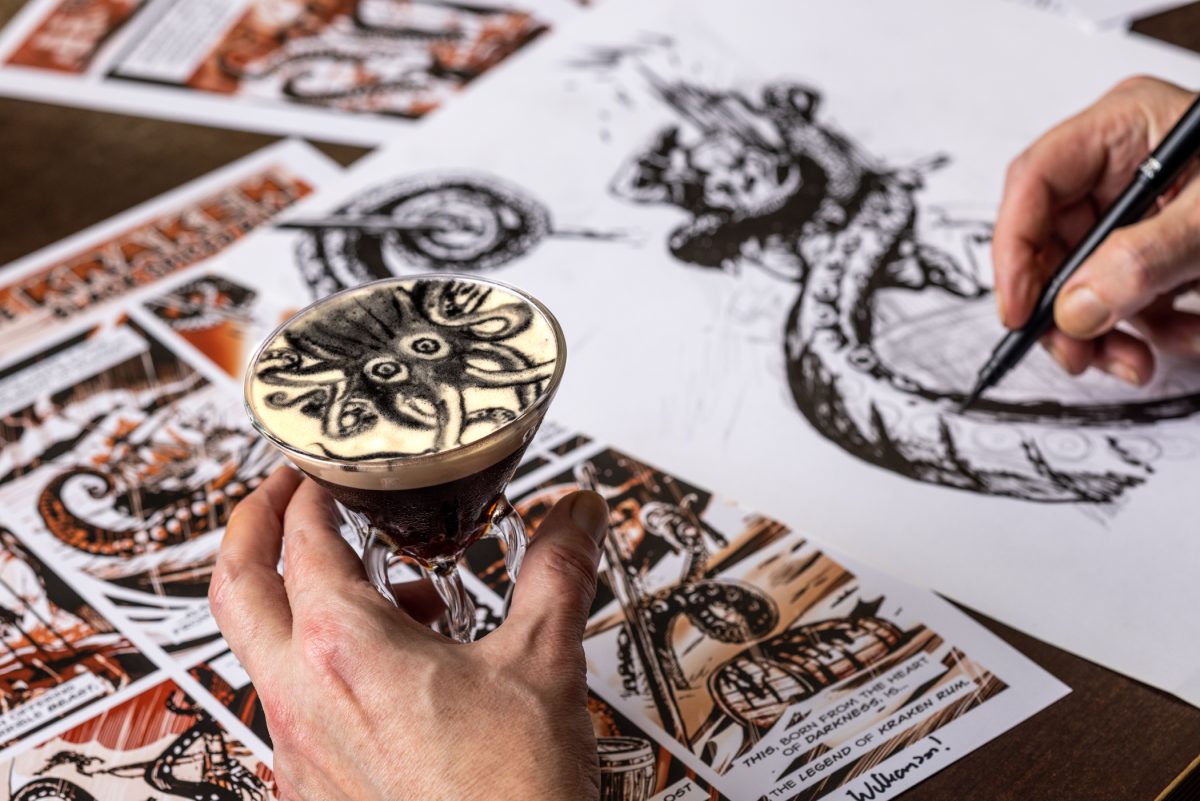 The master of the dark arts (and darker rum), The Kraken, is celebrating the launch of its first flavoured rum, The Kraken Roast Coffee, with the creation of the UK’s first-ever pop-up gallery that invites guests to drink the artworks on the show!

Opening in London’s Greek Street, Soho on 28th May with daytime viewing open to all (Midday – 6 pm) and ticketed opening party (7 pm-11 pm); the pop-up gallery will showcase bespoke Kraken artworks created in collaboration with the world-renowned comic artist Brian Williamson. Strictly limited to 100 hands numbered and signed ‘drinkable prints’, the detailed illustrations will be brought to life on Espresso Rumtini cocktails, thus transforming them into ‘Espresso Artinis’, as well as being hung as more traditional forms of artwork in the gallery itself.
Upon arrival, guests will be given a gold coin which they can exchange for an Espresso Artini with an illustration of their choice atop the piece of printed edible art. Those who want to try out drawing their cocktail artworks will also have the chance to book in for a masterclass during the daytime with renowned coffee artist Ben Lewis in a designated ‘art room’ at the London gallery, with each daring artist rewarded with a delicious drink at the end of their endeavours.
Subverting the norms of a usual exhibition, The Kraken’s Espresso Artini pop-up will [of course] play host to a full Kraken bar, stocked with a range of cocktails created with The Kraken Roast Coffee and its signature cocktail – The Perfect Storm, crafted with The Kraken Black Spiced Rum, ginger beer and lime. The Kraken Roast Coffee (70cl, 40% ABV) is a rich fusion of Spiced Caribbean Rum and fine Arabica Bean coffee. As a result, it tastes as devilishly intense as one might suspect – craftily balancing the rich, dark, smooth taste of coffee with the original Kraken Black Spiced Rum spices.
The story goes that in an attempt to ward off an imminent Kraken attack, those who occupy the shores of the High Seas and beyond have persisted with ancient and unavailing methods of hindering The Beast, one being to harness the dark aroma of roast coffee in a futile attempt to deter him. As you’d expect, even the most menacingly potent of Arabica Beans cannot stop one as mighty as The Kraken, but at least it has resulted in this new and rich dark rum. One which is suitable for vegetarians and vegans.
The Kraken Espresso Artini Exhibition will be popping up at 59 Greek Street in London on 28th May. A limited number of tickets are available, which can be booked here: https://the-kraken-artini.myshopify.com/. Each ticket costs £5 per person and will include entry, an Espresso Artini and a taste of The Kraken Roast Coffee in two other cocktail forms.
The pop-up will then travel to Head of Steam in Birmingham on 8th June and Call Lane Social in Leeds on 9th June. Entry is free, and guests can exchange a gold coin given upon arrival for an Espresso Artini featuring apiece of printed edible art on top.
For those unable to attend one of the pop-ups, rum fans can also enter a competition to be in with the chance of winning a bespoke Kraken Roast Coffee Espresso Artini kit that includes everything one needs to re-create cocktail artworks at home. A few kits are available to win via The Beast’s online portal, The League of Darkness; Brits can enter to win via this link. If chosen, the equipment will be delivered to their home nationwide in June: https://www.theleagueofdarkness.co.uk/competitions/45.