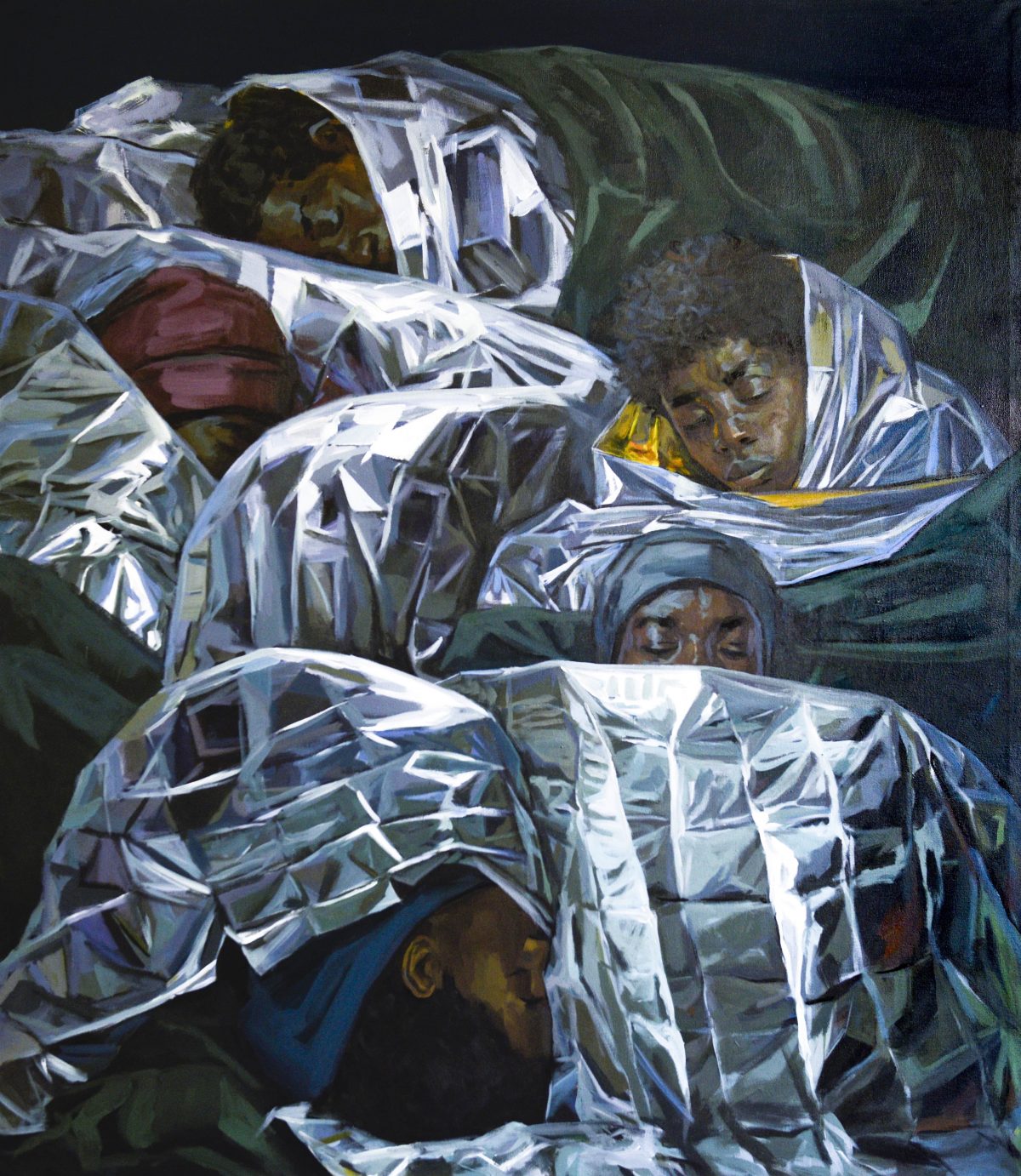 Exhausted faces, framed by bright orange life jackets, gaze out at the viewer, their eyes filled with emotion. At the same time, other figures are huddled together in groups, their bodies wrapped in shimmering golden blankets as they watch distant boats on stormy seas. These poignant paintings are a continuation of Ethiopian artist Tewodros Hagos’series The Desperate Journey, aiming to raise awareness of the global migrant crisis and address the dehumanising effect of journalistic imagery and footage. For his solo exhibition entitled The Desperate Journey II at Kristin Hjellegjerde Gallery, London Bridge, Hagos presents exquisite new works that elevate the tragedy of the situation and the emotional experience of each of his subjects.

The series initially began to respond to the artist’s increasing realisation of the ineffectiveness of news stories and imagery to convey lived experience or complex truths. While many media feed images may provoke an immediate emotional response, they are often deliberately sensationalised to shock the viewer. Over time, the bombardment of such imagery risks normalisation of what ‘remains one of the worst humanitarian crises of our time.’ ‘People don’t realise that the migrant crisis is ongoing. The media focus switches from one direction to another. Currently, it’s on coronavirus, while here in Ethiopia and Africa more generally, millions of people continue to be displaced as a result of conflict,’ says Hagos. Through the classical, static medium of painting, the artist invites a slower, deeper kind of contemplation that counters the fast-paced consumption of digital media.

Significantly, the works, especially the close-up portraits, convey a sense of strength and tragedy, loss and grief. The painting entitled Journey (40), for example, depicts a young boy staring directly at the viewer. Instead of pleading, his expression is solemn and dignified. In many works, Hagos also transforms the foil blanket, which is traditionally used in emergencies to keep people warm, into a thing of beauty. It is gold and silver surface is luminous in the darkness.

At the same time, the stark contrast of light and dark creates an unsettling atmosphere and almost surreal effect. This is perhaps most notable in the work entitled Journey (42), in which a man appears enrobed in a golden blanket, his presence huge and looming against the inky blue background of the sky and ocean. The composition recalls traditional portrait paintings and the portrayal of grandeur. Still, instead of a lavish, homely domestic setting, the vast, empty sky conveys an aching sense of isolation and loneliness mirrored in the man’s expression and watery, red eyes. In this way, Hagos creates a more complex, layered narrative that demands a deeper level of engagement while questioning which individuals and events are traditionally recorded by history.

Amongst the most devastating paintings take a wider perspective, focusing on the perilous sea journey that hundreds of migrants make every day in search of better living conditions. In one work, a dangerously overcrowded boat floats towards the front of the canvas, while in the background, a second boat is enveloped in flames, smoke billowing into the sky in huge plumes. Another painting depicts life jackets floating emptily on the waves, once again underlining the potentially fatal risk that such a journey presents. As with all of the works in the series, the paintings possess a haunting sense of stillness that reflects the historical impact of the crisis and appeals to our shared sense of humanity.