The 24/7 Bed: Privacy and Publicity in the Age of Social Media by Beatriz Colomina 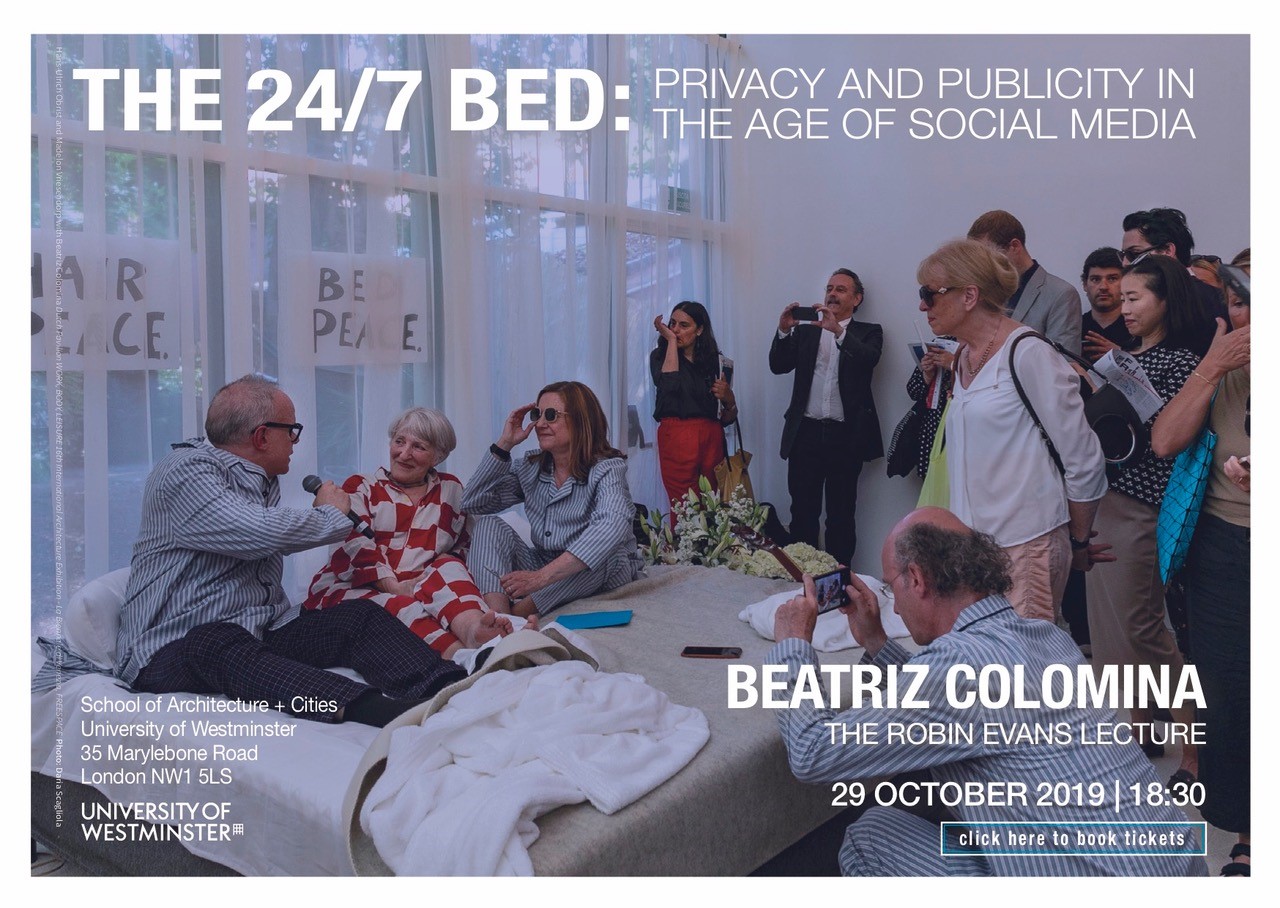 About this Event
The city is not what it used to be. What is private and what is public has become completely blurred. We can no longer think of distinct spaces for work, play, domesticity, and rest. We are living in a 24/7 culture. Industrialisation brought with it the eight-hour shift and the radical separation between the home and the office or factory, between rest and work, night and day. Post-industrialisation collapses work back into the home and takes it further into the bedroom and into the bed itself. Networked electronic technologies have removed any limit to what can be done in bed. Millions of dispersed beds are taking over from concentrated office buildings. The boudoir is defeating the tower. This lecture explores the new role of the bed as the epicentre of labour, post-labour and love in the age of social media

About the Speaker
Beatriz Colomina is the Howard Crosby Butler Professor of the History of Architecture at Princeton University and a 2018–2019 fellow at the Wissenschaftskolleg zu Berlin. She writes and curates on questions of design, art, sexuality and media. Her books include Sexuality and Space (Princeton Architectural Press, 1992), Privacy and Publicity: Modern Architecture as Mass Media (MIT Press, 1994), Domesticity at War (MIT Press, 2007), The Century of the Bed (Verlag fur Moderne Kunst, 2015), Manifesto Architecture: The Ghost of Mies (Sternberg, 2014), Clip/Stamp/Fold: The Radical Architecture of Little Magazines 196X–197X (Actar, 2010), Are We Human? Notes on an Archaeology of Design (Lars Muller, 2016). She has curated a number of exhibitions including Clip/Stamp/Fold (2006), Playboy Architecture (2012) and Radical Pedagogies (2014). In 2016 she was co-curator of the third Istanbul Design Biennial. Her latest book is X-Ray Architecture (Lars Muller, 2019).

About the Lecture Series
This series supports outstanding scholarship in the history of architecture and allied fields, building on the work of Professor Robin Evans (1944-1993). It encourages scholars working on the relationship between the spatial and social domains in architectural drawing, construction and beyond. Evans’ work interrogated the spaces that existed between drawing and building, geometry and architecture, teasing out the points of translation often overlooked. From his early work on prison design and domestic spaces, through to his later work on architectural geometry, Evans sought to articulate the multiple points at which the human imagination could influence architectural form. His first book, The Fabrication of Virtue, analysed the way that spatial layouts provided opportunities for social reform via their interference with morality, privacy and class. In The Projective Cast: Architecture and its Three Geometries, Evans traced the origins of the humanist tradition to understand how human form influenced architectural drawing and construction, focusing on aesthetic dimensions in the production of architectural space. This series will provide opportunities for the creation and/or dissemination of work by scholars working on similar questions of space, temporality, and architecture. In particular, it supports work that breaks the boundaries of traditional disciplines to think though these complex networks involved in the space between human imagination and architectural production.