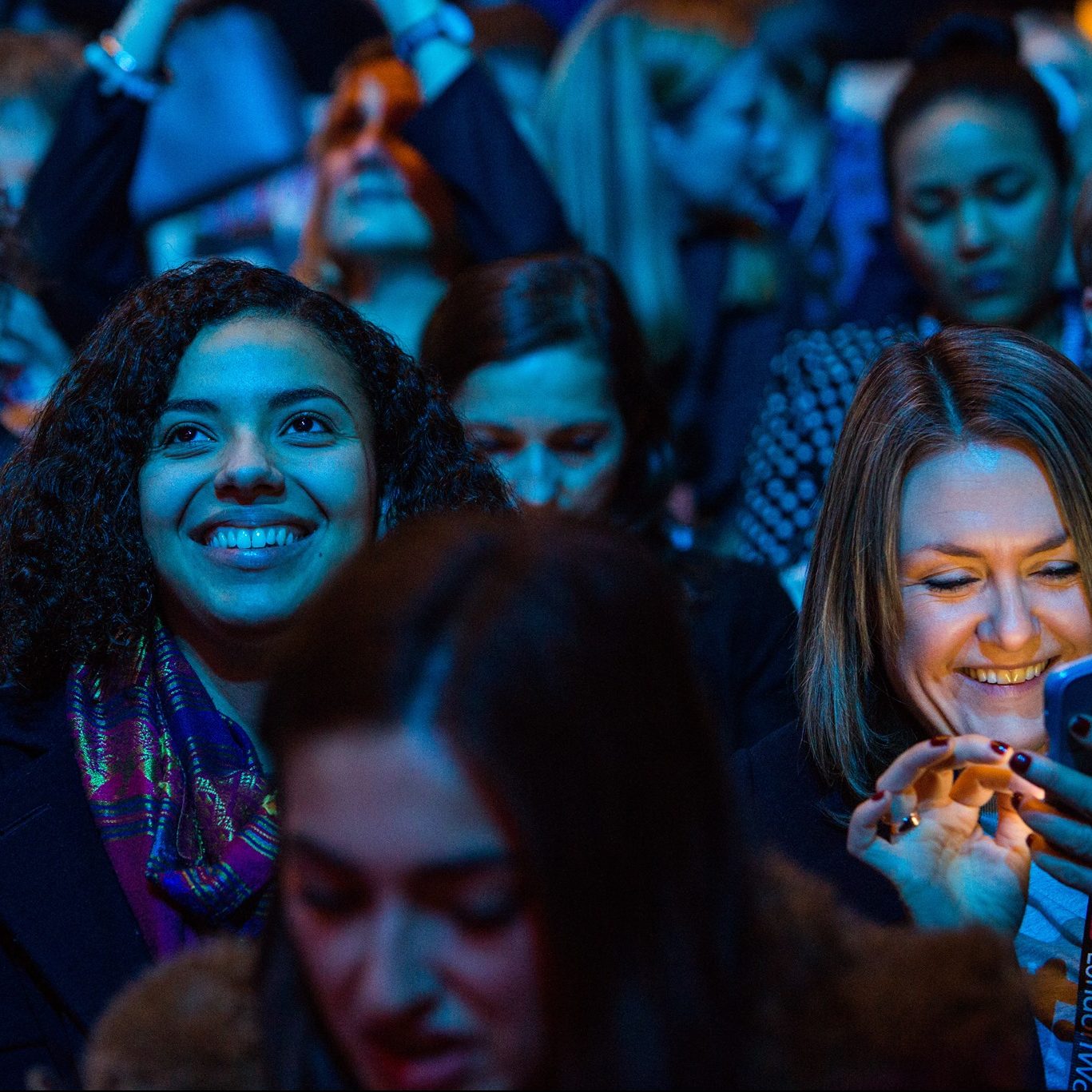 Tickets to TEDxLondonWomen are now on sale!

Join us for the day as we turn our attention to uncover how women and non-binary and genderqueer people the world over are ‘Showing Up’, breaking out and pushing boundaries.

Whatever their focus and talent – business, technology, art, science, politics – these pioneers and their allies are joining forces in an explosion of discovery and ingenuity to drive real, meaningful change.

As part of the Global TEDxWomen events programme, TEDxLondonWomen will celebrate how these dynamic and diverse people are showing up to face challenges head on, all while empowering each other to shape the future we all want to see.

TEDxLondonWomen is an inclusive space. We are passionate and proud to reflect diversity both in our audience and on our stage.

A multi-talented singer and musician, Anaïs has lived multiple lives. Moving from Toulouse, to Dublin, to Dakar, to California, to New York and finally to London, Anaïs’s feeling of belonging everywhere and nowhere has added many colours to her creative palette. Her music explores narratives of blackness, but purposefully seeks to defy any attempts to reduce Blackness into a singular narrative, instead showing human nature in all its complexity. Paying homage to Nina Simone, Anaïs’ debut single “Nina” touches on themes of reclamation and freedom. Her latest project “Darkness At Play” explores political contradictions, selfhood, and the divine feminine.

Angela Francis started as an accountant in the energy industry before moving into economic development where she has worked for the last 18 years. Throughout her career, she has always found ways to focus on how our human systems – energy, production, consumption, transport and planning – need to change to come into line with our planetary ones. After finding her home in the environmental advocacy sector, Angela is now Chief Advisor on Economics and Economic Development at WWF (World Wide Fund for Nature). She provides economic advice across the climate, food and biodiversity programmes, as well as leading on trade and industrial policy for a green transition.

Dr Julia Shaw is a psychological and memory scientist at UCL, and co-founder of Spot, a startup that helps employees report workplace harassment and discrimination. Through her research to understand the barriers employees face when reporting their negative experiences, she’s determined to uncover how we can better mobilise witnesses and how we can all be better allies. Her bestselling debut book, The Memory Illusion, was published in 2016 to critical acclaim and she went on to publish her second international bestseller Evil: The Science Behind Humanity’s Dark Side in 2019.

Award-winning editor, writer, speaker and model, Jamie Windust, explores authenticity, creativity and forging identity as a non-binary person. Jamie frequently writes for well-known national publications and has worked within the fashion industry with brands such as Tommy Hilfiger, UGG, and Rokit Vintage, exploring how the representation queer identities can incur meaningful change in the fashion industry. Jamie is currently writing their debut book. Both raw and playful, Jamie’s book offers a multidimesional and nuanced insight into life as a non-binary person in the twenty first century.

Global retail authority and advocate for The Kindness Economy

Mary Portas is a leading authority on the retail sector, having transformed Harvey Nichols to a global luxury global brand and produced a host of retail and business-themed TV programmes. A determined, passionate advocate of the social role of retail, Mary’s latest projects aim to make the world a fairer place. Work Like A Woman is a manifesto for change and the book and podcast of the same name are being used by businesses across the UK to create positive change. Mary believes we are entering a new era of retail, where people want meaningful connections and shared values. Mary calls this new era, ‘The Kindness Economy’, where kindness is the new economic and social capital.

Nathaniel Cole is a researcher, workshop facilitator and writer, who explores masculinity, mental health and sex education. He co-founded the inner city swimming club, Swim Dem Crew, which uses swimming as a tool to bring people together, cultivate a strong community and make the sport more inclusive. Nathaniel also works with The Good Lad Initiative and Sexplain UK, where he talks to young people – especially boys and young men – about their bodies, consent, gender and sexuality, masculinity and relationships. As a writer and speaker, you can find his previous work on platforms such as AFROPUNK, the Guardian, and the National Theatre.

Nikita Gill tells stories through poetry, prose and plays that retell, rewrite and reimagine the stories we have heard in folklore, mythology and fairy tales. Writing with a strong emphasis on women’s voices, Nikita’s most recent collection, Great Goddesses (2019), is an illustrated collection of stories and poems about goddesses from Greek mythology, including well-known stories of Hera, Athena, and Scylla. Nikita is passionate about the power of poetry to bring about change and to address political and societal issues and is the UK’s most followed poet on social media.

As a Muslim, Asian feminist since age seven, showing up and speaking out no matter how uncomfortable the result, has been Onjali’s go-to strategy for all aspects of her professional life. Onjali is the founder and CEO of Making Herstory: an organisation mobilising men, women and children from all walks of life to tackle the abuse and trafficking of women and girls in the UK and beyond. Since 2015 she has ‘shown up’ to deliver emergency aid convoys for refugee families surviving across northern France, leading her to write her first children’s novel, The Boy at the Back of the Class. Her second children’s novel, The Star Outside My Window, tackles the impact of domestic abuse on children’s lives.

As recent University of Cambridge graduates, Chelsea and Ore, experienced being a minority in a predominantly white institution. Their experiences led them to write Taking Up Space a groundbreaking exploration of the problems of diversity in education. This manifesto for change is both a guide for black girls to navigate universities and higher education and a call for change in these white dominated institutions more widely. Currently, Chelsea is studying at the University of Law for a training contract and Ore is a Special Assistant and Speechwriter to the Vice President of Nigeria.

A survivor of child marriage, who lost her sister Banaz in a tragic “honour” killing, Payzee’s focus to prevent “honour” based abuse and child marriage could not be more personal. A Kurdish immigrant, raised in London, with a successful career in the fashion industry, she uses her voice to speak out as a survivor – not a victim – and has made it her mission to be a changemaker, campaigning to make child marriage a crime.

After the birth of her daughter, Poppy felt afraid to venture outside alone, fearful of societal judgement. Living for the first year of her daughter’s life with Ekaya, a not for profit providing temporary accommodation for predominantly black and ethnic minority women, Poppy became passionate about supporting young mothers. Now, Poppy is a primary school teacher in inner London. She was named London’s Newly Qualified Teacher of the Year in 2019 and she represented Ekaya at a conference in Brussels regarding the rights of young citizens in Europe.

Sanah is a queer Pakistani muslim womxn, trainee clinical psychologist, spoken word artist, poet and reporter. Her poetry explores intersectional identities, and themes such as sexuality, faith, relationships and mental health. In particular how we can challenge narratives of internalised shame through compassion, radical self-acceptance and writing. She recently won the Outspoken Prize 2019 in the Performance Poetry and presented ‘Young, British and Depressed’, a Channel 4 Dispatches documentary. Sanah works closely with grassroots organisation Jawaab to help tackle Islamophobia and, as a trainee clinical psychologist, is conducting research to deconstruct whiteness within clinical psychology.

Sarah Mardini is determined to help others escaping violence. Fleeing the Syrian civil war, her family decided to seek refuge in Europe. Disaster struck when the overcrowded, inflatable boat she was travelling on to Greece starting sinking in the Mediterranean. As competitive swimmers, Sarah and her sister, Yrsa, along with two other men, managed to save the 18 people onboard by swimming the boat to safety in Lesbos. Sarah was hailed as a hero, re-settled in Berlin, and a year later returned to Lesbos to volunteer with the Emergency Response Center International as a search and rescue swimmer. However, in August 2018, she was arrested on human smuggling charges in Greece. Spending almost 4 months in jail, Sarah’s incarceration was heavily criticised by human rights groups. Although she was released on bail, the case against her is still open.

At just 15 years old, Stef Reid’s life changed dramatically. Already a talented sportsperson, with an eye on the rugby world stage, her dreams were shattered when a boating accident resulted in the amputation of her right foot. Fast forward to 2019, Stef is a Great Britain Paralympic long jumper and a five-time world record holder, reigning world champion and triple Paralympic medallist in the long jump and 200m sprint. Away from the track, Stef works as a broadcaster, actor and ambassador for Leprosy Mission UK. She is also a keen cook and was a finalist on BBC Celebrity Masterchef 2018.

Specialist in far-right extremism and co-founder of Moonshot CVE

Vidhya Ramalingam has spent much of the last decade countering white nationalist extremism and terrorism. Following the 2011 attacks in Norway, she led the European Union’s first inter-governmental initiative on far-right terrorism and extremism. In 2015, Vidhya co-founded Moonshot CVE, a company using technology to disrupt and counter violent extremism globally, primarily by creating online intervention programs and automated messaging to disrupt hate online. In her spare time, Vidhya serves on the board of Life After Hate, an organisation set up by former white supremacists to help individuals leave hate groups.