Tadhg Daly at The Finsbury + Support 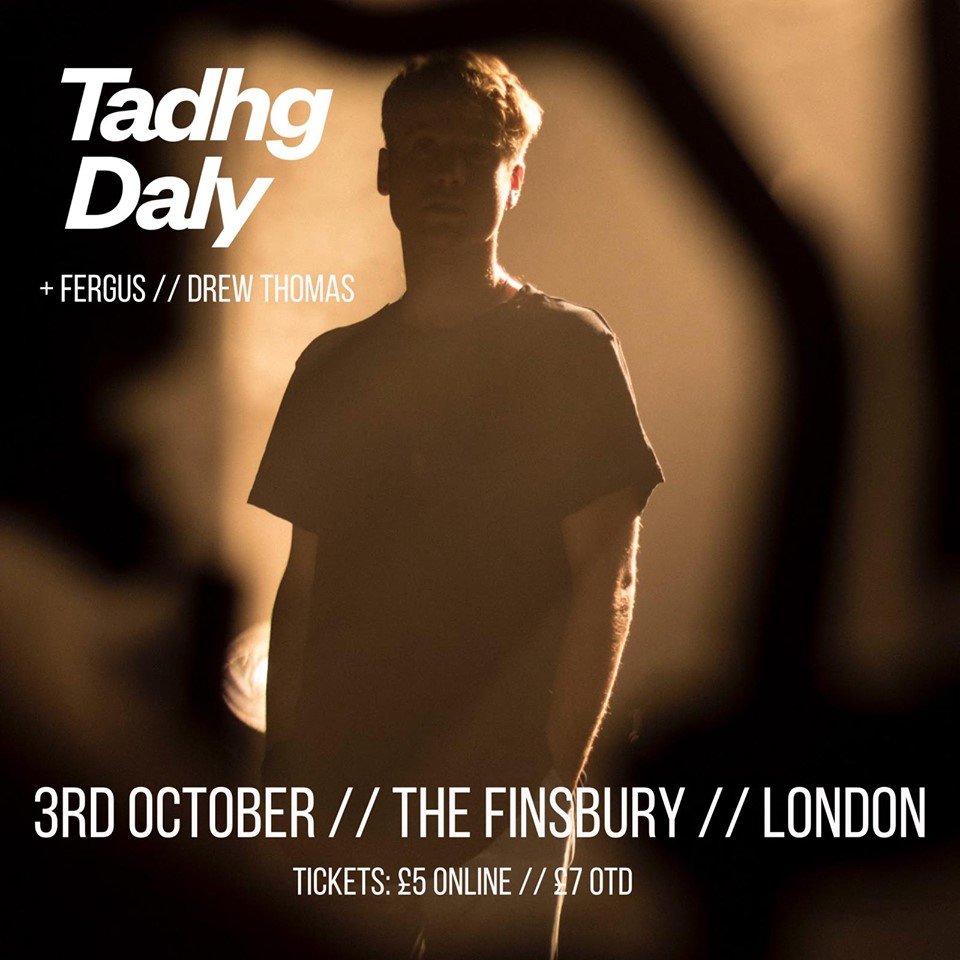 3rd October sees Tadhg Daly take to The Finsbury stage for his biggest London headline show to date. Support comes from Fergus and Drew Thomas
Tadhg Daly is a Jersey Born singer/songwriter who has starting to make waves in the UK. In the relatively short time, he’s been performing Tadhg has played sold out headline shows in renowned London venues such as Notting Hill Arts club, The Troubadour and Jerseys Blue Note bar and Rojos. He recently wowed a crowd of 2500 + at Jersey’s Fort Regent when he opened for James Blunt and has since released his debut single “Too Late” and follow up single “Fires” to critical acclaim, “Fires” racking up over 50,000 streams on Spotify in its first month. Since then Tadhg has gone on to release 2 more singles, ‘Hit the ground’ and ‘stuck in the middle’ collectively racking up over 250,000 streams and being featured on Spotify editorial playlists such as: New music Friday UK, New music Friday Mexico, New Alternative and New Pop revolution.

FERGUS-
Fergus writes songs according to his mood, often choosing to embrace the melancholy, and through it finding a place of healing, beauty, and serenity. His formative years were spent singing and touring professionally with choirs and playing ‘cello with orchestras. When this period of his life – a half, up to that point – came to an end he found himself burnt out, without a sense of identity. Seeking self-discovery, he rebelled. After a time, adrift, his love of making music returned for good. Fergus turned his ability to blend into a strength, achieving harmony with his guitar and himself.

DREW THOMAS-
“There’s never really been a plan B, it’s always been music or nothing for me” states Drew Thomas, a Nottingham-born singer-songwriter, now based in London.
With The Fray and Fleetwood Mac as influences, Drew creates his personal blend of piano rock song writing with honest and wise lyrics beyond his years.

“I want to make music that makes people feel something. Whether it’s happiness at 2 o’clock in the afternoon or nostalgia at 5am, I want my music to affect people in the way so many have affected me.”
Having played shows in all corners of the country in various projects since he left school, including appearances at Reading & Leeds festivals and daytime playlist slots on BBC Radio 1, Drew has kept his song-writing at the forefront of everything he’s done.
Since taking the leap and going it alone last year, Drew has already gained momentum, having played various shows in the capital and receiving highly acclaimed support from Sofar Sounds and BBC Introducing. Having already supported the likes of Kaiser Chiefs, Jack Maynard and the Aces, Drew is keen to push his heartfelt live show to all areas of the country in 2019.