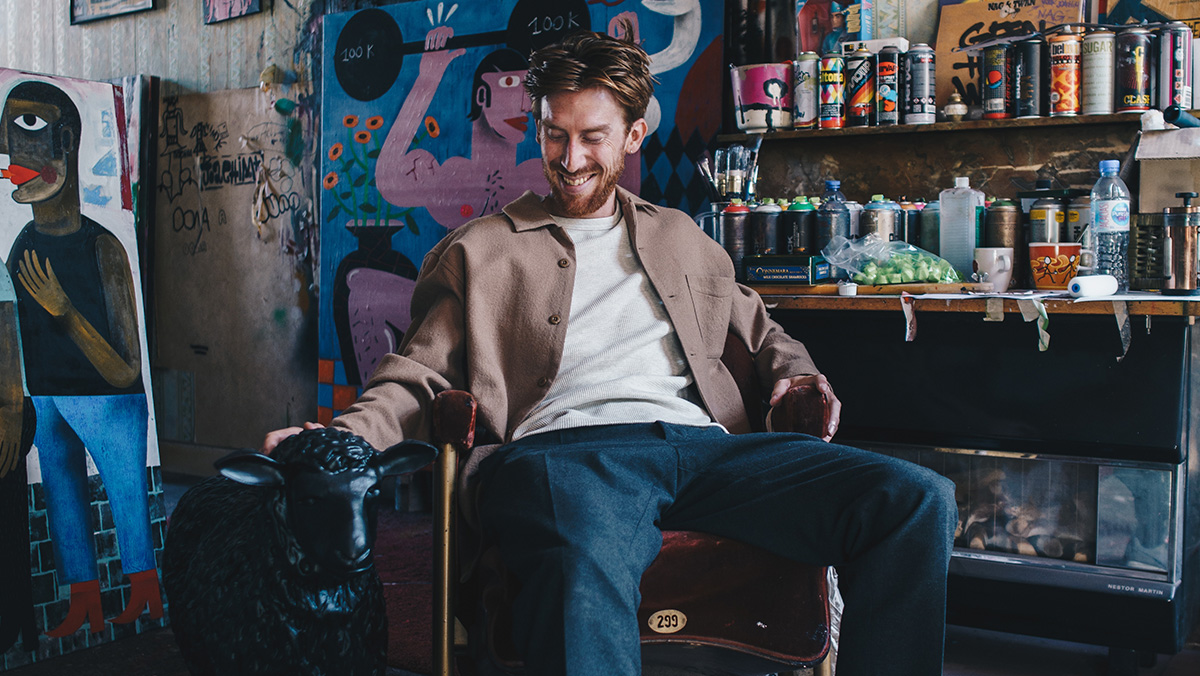 A skull smoking a cigarette, an oversized duck laying an egg, and a smiling butterfly. These are the eccentric visions of Belgian artist Joachim Lambrechts who plays with composition and form to evoke a sense of childlike joy and spontaneity. While the artist typically employs a vibrant colour palette, his latest solo exhibition at Kristin Hjellegjerde Gallery, London, entitled Siluetas, presents a bold new series of textural, monochromatic works, marking newfound confidence and aesthetic purity. 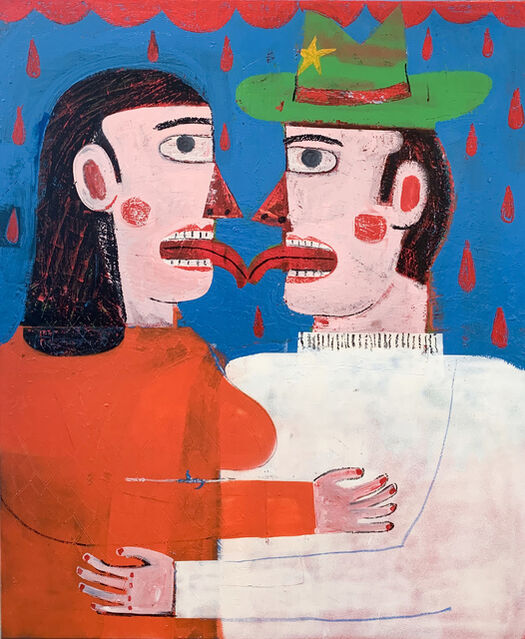 Lambrechts’ practice embraces and celebrates free creative expression. He never plans his compositions, instead preferring to allow the image to reveal itself through the act of mark-making. Although this new series of black and white paintings express a certain restraint, the images retain a powerful sense of dynamism which reflects the artist’s spontaneous process. With these works, he began by pasting pieces of coloured paper onto the canvas to create a sense of texture and depth before applying layers of black paint. Broad brush strokes and lines of white colour were then used to delineate the outlines of objects and animals so that from a distance, they appear as silhouettes or shadows. At the same time, closer inspection reveals flashes of colour breaking through the surface where the artist has scratched or scraped away the paint. This creates a palpable tension between mark-making and erasure, movement and stillness, artistic abandon and creative control.
For this latest body of work, Lambrechts took inspiration from early cave paintings, which convey complex narratives and emotions despite their simplistic style. Similarly, the artist has deliberately restricted his lines to what is only necessary to obtain a particular shape or form. The painting Pantera Negra, for example, depicts a black cat (or panther) whose body mainly consists of a large black shape with four vertical lines indicating the outlines of its front legs. As with all artworks, Lambrechts’ signature graphical style simultaneously clarifies and distorts our understanding of the image. The cat’s shape appears both childlike and surreal, just as in the painting Pegasus, we can immediately identify the mythical horse while viewing the creature from a seemingly impossible perspective. All four of its legs appear along the same line, bent and twisted into unnatural angles. “For me, painting is not so much wanting to convey a message, but rather a search for shapes, lines and colour and seeing what possibilities they offer me,” explains Lambrechts. At the same time, this approach invites the viewer to engage more creatively as we are given greater freedom to interpret the compositions.

With some of the works, the artist guides or destabilises our interpretation by incorporating text into the image. The words sometimes act as direct visual labels, such as Black Eagle or Lions, while others appear as witty modern-day aphorisms. The painting When the owl wakes up at night to kill, we sleep, for example, depicts an owl seemingly in a kind of trance state, its eyes filled with white circles and its wings extended while the text forms a literal frame or border around the edge of the canvas. In this way, Lambrechts questions his role as an image-maker by demonstrating how our understanding of artwork is shaped by the composition itself and its framing and external contexts such as titles, accompanying text, and the surroundings in which the work appears. At the same time, however, he draws us closer to the image by inviting us to engage more actively and intimately with the artistic process.
These complex embedded layers of tension and bold visual contrasts are what make the artworks so compelling. By the very nature of paint, they are static scenes while simultaneously bursting with raw, exuberant creativity. 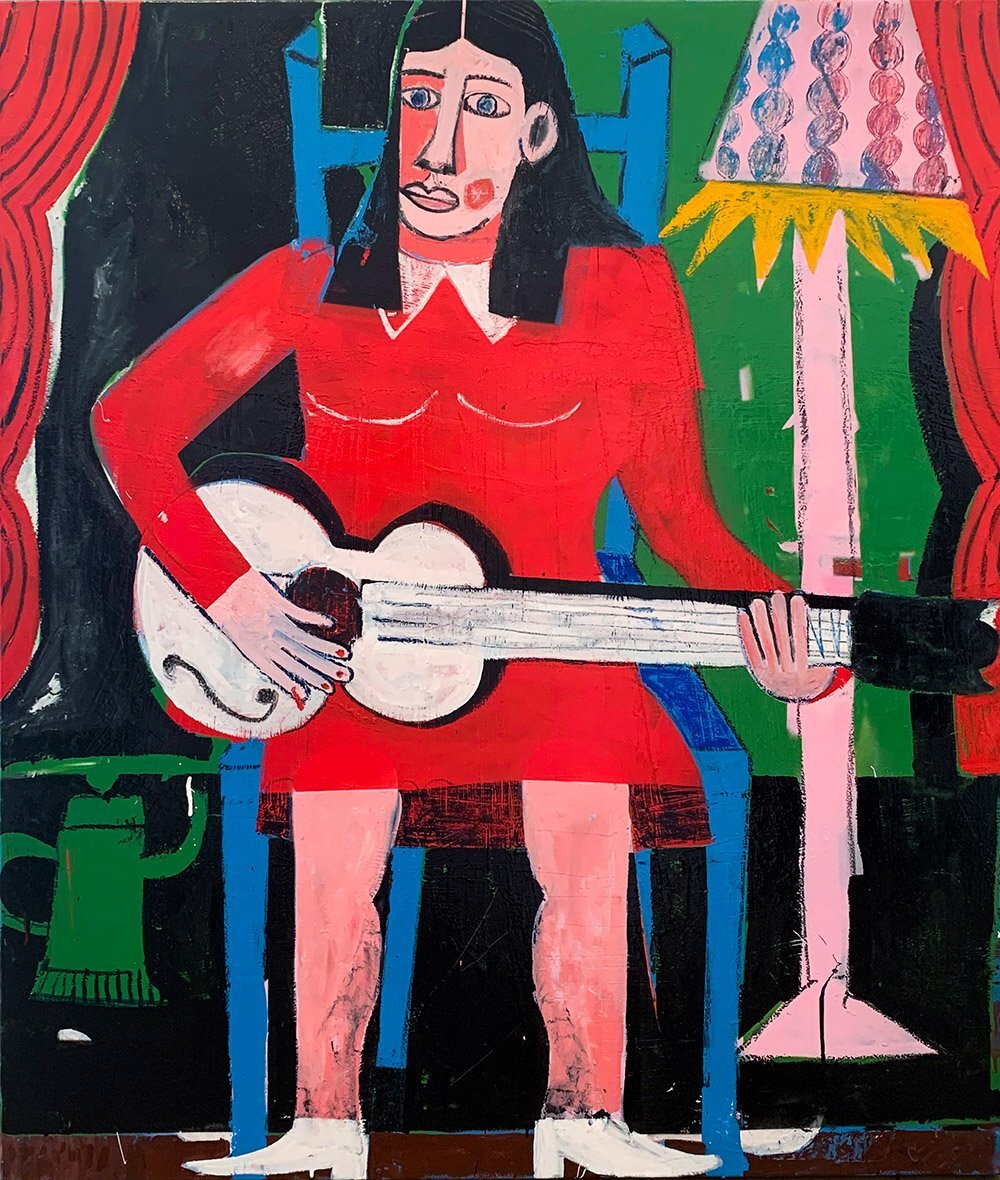 About Joachim Lambrechts
Joachim Lambrechts (born in 1986) is a renowned urban artist from Antwerp, Belgium. In 2001 he began his studies at an art school in Antwerp. Later he got very involved with the graffiti and street art scene in his home city, and in 2004 he distanced himself from his academic education and left art school without graduating. In the years that followed, Joachim spent a lot of time experimenting with various approaches to graffiti and became quickly integrated into the Belgian street art scene. Since 2010, painting on canvas has been Joachim’s primary focus and creating street art across Europe.

In contrast to his murals, Joachim never makes preliminary studies or sketches when he starts working on a canvas. Yet, paradoxically, he feels more accessible within the four walls of his studio, which is reflected in his paintings. They result from a more spontaneous process, and as such, possess a sense of urgency and innocence.