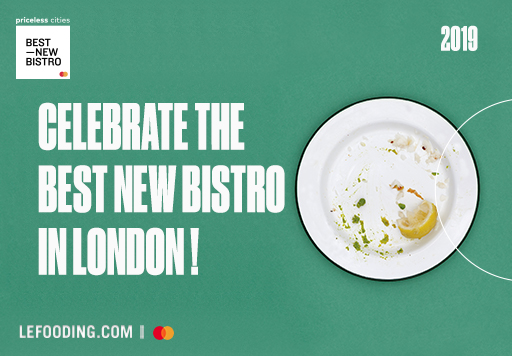 Reserve your tickets now to attend the Awards party for the Priceless London Best New Bistro of the year on November 26th from 7pm.

On the agenda: signature dishes from the award-winning chef, served in their establishment that’s closed to the public (and spruced up!) for the occasion, and lots of other little surprises… And FYI, we’ll be maintaining the suspense as to the location of the party until the night before the winners’ list is made public, at which point participants will receive the name of the winning establishment before anyone else.

So… Who from Bright, Mao Chow or Tayer+Elementary will be voted Priceless London Best New Bistro of the year?

Discover it before anyone else and enjoy a unique experience with the first edition of the Priceless Cities Best New Bistro by booking your tickets on priceless.com right away!

Priceless Cities Best New Bistro is a new international awards program to discover and celebrate the world’s most exciting new restaurants, curated by Le Fooding and powered by MasterCard. For its first year (2019), Priceless Cities Best New Bistro launched simultaneously in four Priceless Cities: London, Mexico City, New York and Paris. And that’s just the beginning! The program will give awards to four Best New Bistros (one per city), which will be announced simultaneously and followed by four award ceremony dinners held in London, Mexico City, New York and Paris