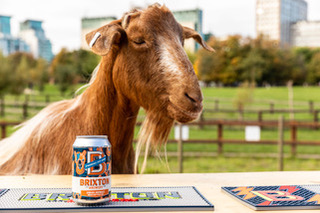 To mark the launch of its limited-edition beer, URBAN ANIMALS, in partnership with Vauxhall City Farm, Brixton Brewery is giving away free cans in exchange for animal noises, such as ’NEIGH’, ‘BAA’ and ‘CLUCKS’, to name a few options available to punters!

The beer is made from hops grown on the farm, and all of the proceeds will be donated to help the community project, which suffered an 81% drop in revenue streams in lockdown and almost closed its door permanently.

To mark the launch of its limited-edition beer, URBAN ANIMALS, in partnership with Vauxhall City Farm, Brixton Brewery is giving away free cans in exchange for animal noises –

Move over crypto because Brixton Brewery has introduced a new form of accepted currency: animal noises!

To mark the launch of its latest limited edition, URBAN ANIMALS, a beer brewed with hops grown at Vauxhall City Farm, the South London brewer is running a special promotion: pay for your first can of beer by mimicking the sound of animals found on the farm.

Yes, that’s right, beer connoisseurs will soon be able to swap ‘BAAs’ for beers. at the bar and online!

Vauxhall City Farm is just a 10-minute cycle from the Brixton Brewery taproom in the heart of Brixton. Hearing that the charity had to close its doors to the public during the lockdown, Brixton Brewery saw an opportunity to make use of the community garden by planting hops and brewing a new fundraising beer to celebrate the work of the farm undertakes in the local community. And now, the Brixton Brewery staff are clucking, quite literally, to share it with the world!

The farm has had a challenging 18 months, losing 81% of its income streams during the pandemic. The threat to its income forced the charity to reduce its staff and services available to locals, as well as being forced to sell several of its horses.

Who would say ‘NEIGH’ to helping a local farm survive? And with this sentiment in mind, all the proceeds from sales of URBAN ANIMALS will be donated to Vauxhall City Farm to fund training volunteers, upkeep of farm premises and feeding animals.

Country bumpkins step aside, URBAN ANIMALS (5.2% ABV) is one for the cool kids (and cows, pigs or chickens) whose natural habitat is the bright lights of the big city. Made using freshly harvested hops grown at Vauxhall City Farm, this green hop pale ale celebrates those hidden corners of the metropolis where surprising things live, grow and thrive on being alive and part of the hive.

What’s more, the new limited edition beer comes in three different can designs, each honouring some of the farm’s most famous residents: Jerry the Alpaca, Cheryl the Chicken and Britney Spurs the Horse.

To get your hooves on Brixton Brewery’s new limited edition beer URBAN ANIMALS, tag Brixton Brewery in a video of you making an animal noise on Instagram to be rewarded with a voucher code for a FREE can to use on their webshop.

Or you can pop down to Brixton Brewery Taproom for a weeklong ‘Pay by Neigh’ event from Thursday 18th until Thursday 25th November. Remember, give the bar staff your loudest ‘BAA’, ‘OINK’ or ‘NEIGH” and expect to be rewarded with a can. In exchange for a beer, Brixton Brewery is suggesting recipients make a donation in the amount of their choice to Vauxhall City Farm, which will fund the charity’s vital community work.

Please note that Brixton Brewery’s new limited edition beer URBAN ANIMALS and its Pay By Neigh campaign are only available to people aged 18 or older.

To follow the launch of URBAN ANIMALS, including videos of locals and Vauxhall City Farm volunteers making a host of animal noises, go to Brixton Brewery’s Instagram page.