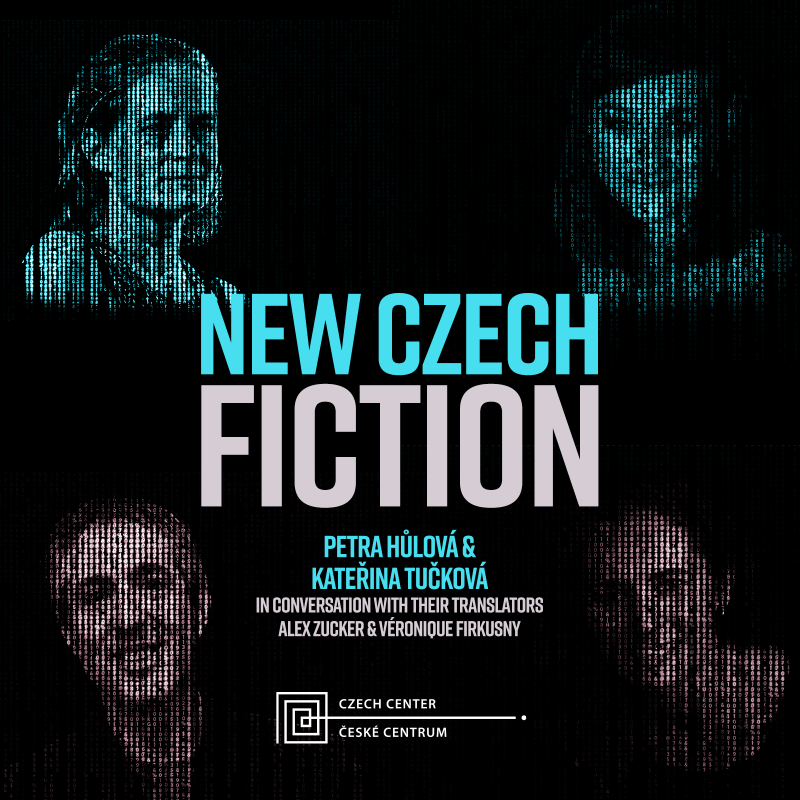 Czech authors Petra Hůlová and Kateřina Tučková discuss their recent novels The Movement and Gerta with their English-language translators Alex Zucker and Véronique Firkusny. How do authors decide what to write about and how to write it, and how do translators (writers, too) reflect those decisions in their work? Join the Czech Center New York and Czech Center London for a one-hour conversation about these questions and more, including the challenges and joys of bringing Czech fiction to English-language readers. The discussion will be followed by an audience Q&A.

PETRA HŮLOVÁ: THE MOVEMENT
In this utopia, the feminist Movement has been successful, and women rule the world. Men are trained at reeducation facilities to accept the new normal in this futuristic satire challenging our sexual norms. The Movement’s founding ideology emphasizes that women should be valued for their inner qualities and not for their physical attributes. As a result, men have been forbidden to be attracted to women based on their bodies. While some continue unreformed, many submit–or are sent by wives and daughters–to the Institute for internment and reeducation. Our narrator, an unapologetic guard at one of these reeducation facilities, describes how the Movement started, her journey, and what happens when a program fails. She is convinced the Movement is nearing its final victory–a time when everybody will fall in line with its ideals. Outspoken, ambiguous, and terrifying, this socio-critical satire of our sexual norms sets the reader firmly outside of their comfort zone.

KATEŘINA TUČKOVÁ: GERTA
The award-winning novel by Czech author Kateřina Tučková―her first to be translated into English―is about one woman’s fate and the pursuit of forgiveness in a divided postwar world. 1945. Allied forces liberated Nazi-occupied Brno, Moravia. For Gerta Schnirch, daughter of a Czech mother and a German father aligned with Hitler, it’s not deliverance; it’s a sentence. She has been branded an enemy of the state. Caught in the changing tides of a war that shattered her family―and her innocence―Gerta must obey the official order: she, along with all ethnic Germans, is to be expelled from Czechoslovakia. With nothing but the clothes on her back and an infant daughter, she’s herded among thousands, driven from the only home she’s ever known. But the injustice only makes Gerta stronger, more empowered, and more resolved to seek justice. Her journey is a relentless quest for seemingly impossible forgiveness. And one day, she will return. Spanning decades and generations, Kateřina Tučková’s breathtaking novel illuminates a long-neglected episode in Czech history. One of exclusion and prejudice, of collective shame versus personal guilt, all through the eyes of a charismatic woman whose courage will affect all the lives she’s touched. Especially that of the daughter she loved, fought for, shielded, and would come to inspire.

Petra Hůlová is a fiction writer and the recipient of several literary awards, including Czechia’s highest academic honours: the Magnesia Litera, the Josef Škvorecký Prize, and the Jiří Orten Prize. She studied language, culture, and anthropology at universities in Prague, Ulan Bator, and New York and was a Fulbright scholar in the United States. Her first novel, All This Belongs to Me (2002, Paměť mojí babičce), won the Magnesia Litera Award for Discovery of the Year; the English translation by Alex Zucker won the ALTA National Translation Award. Her fourth novel, Three Plastic Rooms (2006, Umělohmotný třípokoj), won the Jiří Orten Prize for the best work of prose or poetry by an author thirty or under; Alex Zucker’s English translation received a PEN Translates Award from English PEN. Hůlová’s fifth novel, Taiga Station (2008, Stanice Tajga), won the Josef Škvorecký Prize. A total of ten novels and two plays of hers have been translated into more than ten languages. Fox Eyes (Liščí oči), her latest book, is her first work for children. She lives in Prague. More at https://argo.cz/foreign-rights/petra-hulova.

Kateřina Tučková is a Czech playwright, publicist, biographer, art historian, exhibition curator, and bestselling author of Gerta and The Žítková Goddesses. She has won several literary awards, including the Magnesia Litera Award (for both Gerta and The Žítková Goddesses), the Brno City Award for literature, the Josef Škvorecký Award, and the Czech Bestseller Award. Kateřina is also the recipient of the Freedom, Democracy, and Human Rights Award by the Institute for the Study of Totalitarian Regimes and the Premio Libro d’Europa at the Book Fair in Salerno Italy. Between 2015 and 2018, she was the founder and first president of the Meeting Brno festival, focusing on international and intercultural dialogue. Kateřina Tučková currently lives in Prague and Brno, Czech Republic. Her books have been translated into seventeen languages. Gerta is her first to be translated into English. In 2021, Tučková’s latest novel, Bílá Voda, will be published in Czech. The English translation of The Last Goddess (The Žítková Goddesses) is expected to publish in Spring 2022.¨More at http://www.katerina-tuckova.cz/en/.