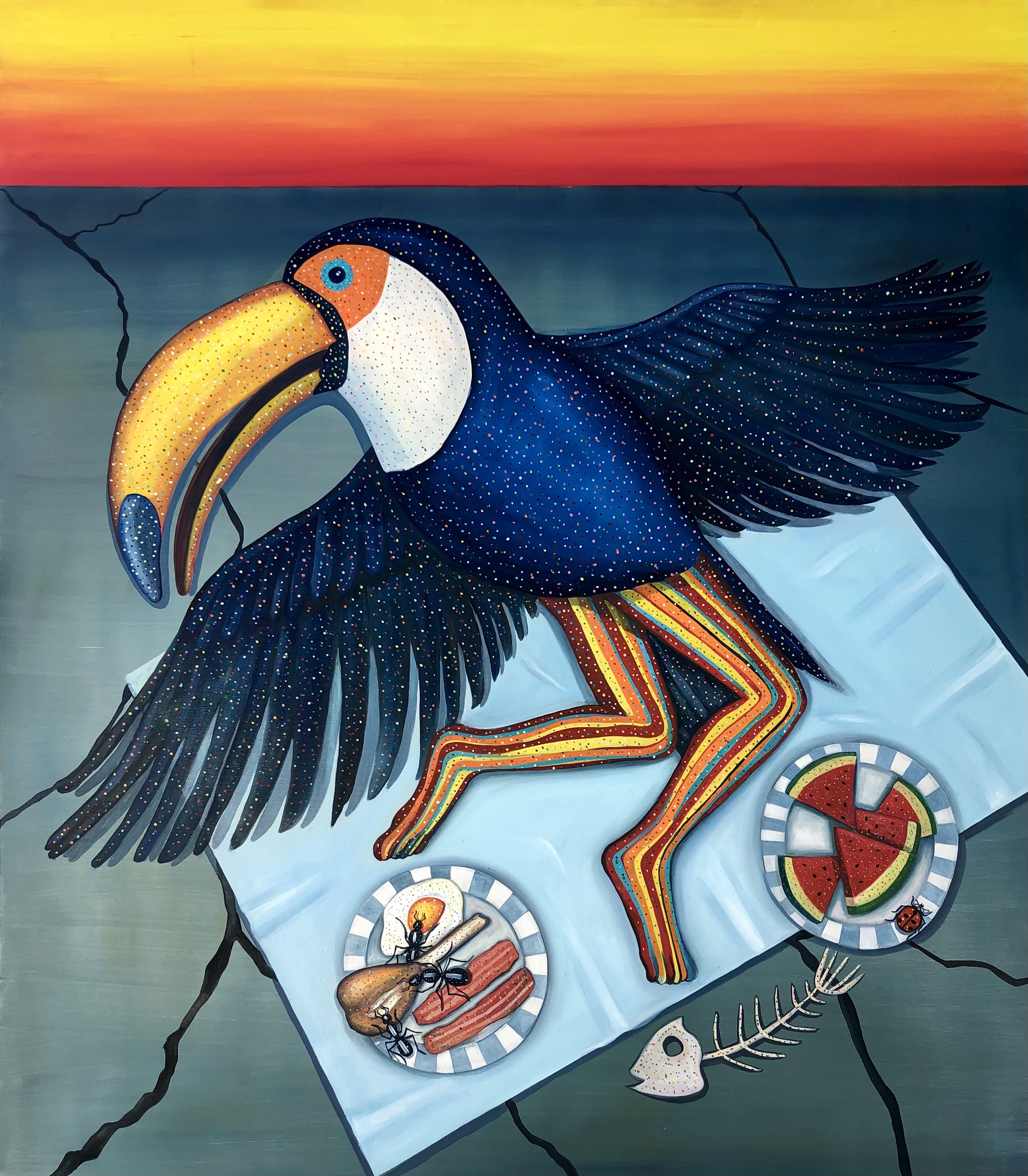 Monstrous hybrid beings appear against acid skies and barren landscapes, creating surreal, otherworldly scenes that sit uncomfortably between nightmare and dream. Nature Interrupted, Celina Teague’s fifth solo show at Kristin Hjellegjerde Gallery, takes a deep dive into the dark underbelly of our planet’s biosphere, where human detritus overcome animals and plants. They appear futuristic, unwholesome, and alarming. Still, at the same time, Teague’s vibrant colour palette commands presence: we are challenged not only to look but to face up to the reality of what we see.

In part, Teague’s artistic practice is an expression of her guilt and responsibility about not only environmental issues but also political and humanitarian crises. She listens to the news and various podcasts as she paints, allowing the information to filter through onto the canvas so that each composition possesses a raw sense of urgency. ‘I paint instinctively. It always involves risk, which I find both liberating and frightening. If I painted on a different day or even at a different hour, the result would be completely different,’ she says.

The work Still I Rise, for example, was made when Teague was listening to reports of the conflict in Afghanistan and specifically about the oppression of women. However, instead of focusing on the bleakness of the situation, Teague’s perspective is one of hope, vitality and strength. In the painting, women dressed in blue burqas appear like flowers blooming at the end of tall lush vines, the winding, interconnected stems suggesting a sense of quiet solidarity. Interestingly, this is the only work in which humanity and nature appear in harmony: the women are supported by the natural world rather than overwhelming it. However, this relationship becomes skewed in the painting Swallowed. Here, the women appear huddled together to form the centre of what looks like a pink flower, but closer inspection reveals that the petals are, in fact, severed tongues. In this way, the work becomes a powerful visual metaphor for how censorship is used as a form of oppression and entrapment.

Although the other works reflect more broadly on the climate crisis, the notion of mutilation runs throughout the exhibition. In one of the more surreal compositions, a giant straw pierces through the centre of a flamingo’s body, which is itself, assembled from pink, fleshy human limbs and organs. A mass of breasts and udders replace its feathers while its foot is a claw-like human hand. The strange yellow glow of the sky suggests a sickness or toxicity, and an egg lies fried on the cracked, dry ground as if baked in the sun. Like all of Teague’s works, the bright colour palette is somewhat misleading: we’re unsure whether to laugh or gasp. Is this a horror or a comedy?

This deliberate ambiguity creates a strong sense of unease that reflects both the subject matter and Teague’s approach to image-making. ‘My work is sometimes labelled as activist art, which I find uncomfortable because painting about these issues doesn’t feel like enough,’ she says. ‘We have all the facts easily accessible to us, but we still just sit back and watch what’s happening most of the time.’ Teague returns to this notion of ‘armchair activism’ in each of her exhibitions by painting an image of an armchair, often encompassing elements from the other works to create a sense of unity while also highlighting the irony of her role as an artist. However, it would be amiss to ignore the power of the image. Teague’s paintings command our gaze and draw our attention to the politics of seeing. Confronted by these strange, unsettling scenes, we can deny neither awareness nor responsibility.