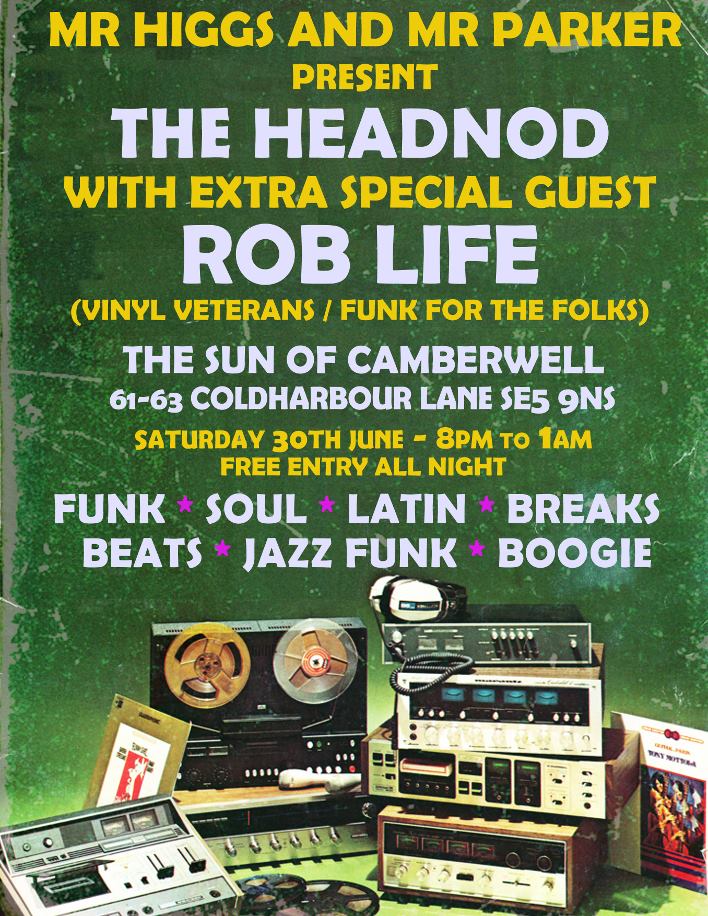 We bring to you some of the best in Soul, Funk, Jazz Funk, Breaks, Beats and Boogie to the heart ❤ of south London, where together with a nice sound system you’ll find a great drink selection, big garden, friendly staff, a great kitchen.

You’ll be as excited as we are to hear that we’ll have no other than Rob Life as our extra special guest this month!

Rob Life is part of the Vinyl Veterans crew and also runs the Funk For The Folks events in Brighton.

His musical tastes were originally influenced by ’80s electro and Hip Hop and from there developed into all things funky and soulful.
Inspired by the 1970s and 80s New York early ‘Hip Hop’ park jams where DJs showcased the art of using cutting 2 copies of the same record.

Rob’s DJ sets are heavy on the funk and have been known to encompass a wide mix of musical genres dipping into funk, soul, Hip Hop, Latin, African beats, B-Boy breaks, psych, disco and more.

He was a founder member of London’s successful Breakin’ Bread record label and club nights between 1998 – 2007 and DJs at the monthly Vinyl Veterans night and other special events as well as hosting the monthly ‘Rare Kind Records radio show’ on 1BTN (1BrightonFM).

Over the years he has played sets across Europe and DJed alongside and supported many acts including DJ Format, De La Soul, Craig Charles, Flow Mo Crew, Jamiroquai, DJ Yoda, Mr Thing, Keb Darge and Norman Jay just to name a few.

Music for LONDON posted an update 1 day ago

The London Library posted an update 5 days, 4 hours ago