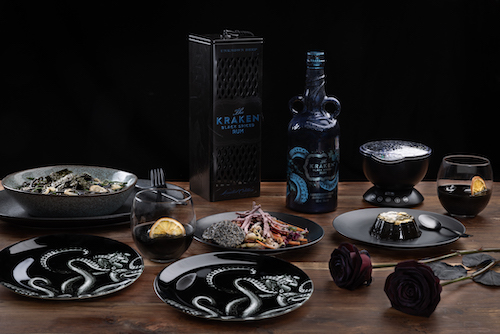 Sharing a candle-lit romantic dinner is a time-honoured Valentine’s Day tradition. But for intrepid Valentines in search of a far more adventurous epicurean experience, The Kraken has the answer in the form of an all-jellyfish tasting menu. A gift from The Beast, delivering treasures from the deep to the tables of loved ones across the nation.

Curated by The Kraken Rum, this world-first romantic jellyfish meal comprises three courses, each with the ocean’s most gelatinous inhabitant taking centre-stage on the plate.

The starter is jellyfish salad with sesame and peanut dressing; the main is teriyaki jellyfish with squid ink noodles and bonito flakes, and the dessert is a seafood pudding of the wobbliest proportions – jelly infused with jellyfish and Kraken Rum.

Cited by scientists around the globe as the sustainable seafood of the future (due to the high number available and the specie’s unique renewable life cycle), the humble jellyfish has been elevated to new heights by a team of chefs to create a gourmet dinner the likes of which have never seen before on UK shores.

Even those most squeamish at the prospect of devouring the venomous, be-tentacled sea creature will be won over by this delicious degustation, with every crunchy yet bouncy bite of glassy jellyfish transporting loved-up diners from their living rooms to the mysterious and bioluminescent world of the deep ocean.

The Valentine’s jellyfish dinner is available exclusively to experience at home. It arrives in a meal kit complete with custom Kraken plates, an ocean projector (to recreate an underwater ambience at home) and an exclusive pre-release bottle of The Kraken’s new and highly-collectable ‘Unknown Deep’ limited-edition (the second in the collection). And although designed for the dinner table, if diners wish to serve the jellyfish dinner in their bathtubs, this is not discouraged.

The jellyfish menu will also be served with a specially crafted bioluminescent cocktail designed to bring to life the natural phenomenon of the ocean’s bioluminescence in a glass. The same pearlescent and shimmering quality is captured in the ‘Unknown Deep’ limited-edition bottle.

Those up for a romantic night of jellyfish can look to get their hands on a kit through The Beast’s online portal, The League of Darkness (https://www.theleagueofdarkness.co.uk/competitions/37) where they will be given away.

Open for entries from 9 am on 7th February until 3 pm on 9th February, Kraken fans will need to pen their very best love letter to The Beast to be in with the chance of tasting the jellyfish. Deliveries will arrive in time for an early Valentine’s Day celebration on 12th February.

Kraken’s ‘Unknown Deep’ limited-edition bottle will also be officially launched to purchase via Amazon or The League of Darkness soon. Keep an eye on @krakenrumuk for more details.

Bravely commandeered from the gloom of the ink-black abyss, the second limited-edition bottle from The Kraken’s ‘Unknown Deep’ collection represents a second attempted expedition to find The Beast. The bottle has a deep blue pearlescent coating with a rough, tactile embossed finish and shimmering detail. It comes contained within its distressed diving cage – a tribute to the brave explorers. They risked life and limb by plunging to the very darkest depths to haul these mysterious bioluminescent bottles to the surface.

Hell-bent in its desire to protect the creatures of the ocean, The Beast, will once again be showing its compassionate side by teaming up with marine conservation charity PADI AWARE, with £1 from the sale of each ‘Unknown Deep’ limited-edition bottle being donated to help the organisation in its mission to reduce ocean debris by half in targeted countries within the next decade.