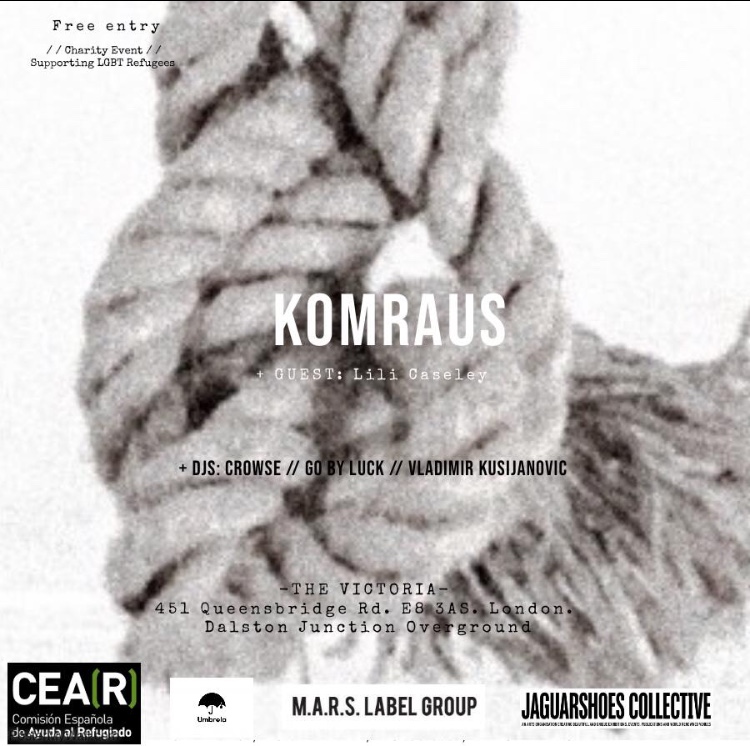 FREE Entry- all donations to CEAR.

Komraus will release on the 2nd of Nov their second single with M.A.R.S. Label Group, titled ‘Untie the ropes’. This song empowers freedom and being yourself with no fear. So it will be the anchor song that marks the beginning of the collaboration between KOMRAUS and CEAR. Funds from the single, merch and event will go directly to CEAR.
Album to be released in Jan 2019 after a successful year of London headlines shows and International touring.

GUEST ACTS:
Lili Caseley:
Hailing from North London, Lili Caseley is a multi-talented singer and songwriter who’s winning the hearts of fans and critics alike with her meaningful soul pop about lovers and experiences, past and present. Her songs, deceptively simple in structure but teeming with emotional honesty, are influenced by her Portuguese heritage, legendary poets and the biggest pop talents of today.
Yet to release her debut EP, she’s already won support from respected music titles like Clash and Notion, while receiving coveted airplay from Radio 1xtra’s Toddla T on Target’s show and Radio 6’s Tom Robinson, on his BBC Introducing mixtape show.
http://www.lilicaseley.com

Umbrela Collective Djs will also perform on the night. Artists from different cultures, languages and backgrounds from around the world, who aim to spread ideas of globalis, open-mindness and all types of art.
Djs: Crowse, Go by Luck and Vladimir Kusijanovic.

More details on the full line up soon.

This will be a FREE event and all donations will be directly passed to CEAR. The non-for profit organization that is doing a remarkable work for the last 40 years in Spain, that has been welcoming refugees for over years.

Doors will open at 7 pm.

KOMRAUS organises the event ‘Untie the ropes’ helping to raise awareness and funds for the LGBT Refugees. 6th of Nov at The Victoria, Dalston. In collaboration with MARS Label Group from The Netherlands, CEAR (Spanish Commission Helping Refugees) and Jaguarshoes collective in London.
Untie the ropes is also the title of the new KOMRAUS song and music video that will be out from the 2nd and 6th of Nov respectively. Untie the ropes is a song about personal growth, freedom and self-respect. With this song KOMRAUS wants to remind us all that we are free to choose what we want to be. That’s the reason why they support with this song all the brave ones that are living complicated situations as refugees: the LGBT refugees.
KOMRAUS is a band formed in London by European successful professional musicians that with their next single feel the urge to raise awareness about the refugees situation and in particular the LGBT refugees. KOMRAUS members were all somehow migrants themselves when they first arrived in London many years ago and now they feel again the uncertainty, like many others, of Brexit. Sara Rioja, the singer and one of the composers of the band, is originally Spanish; Spain is one the countries welcoming more refugees in the last 30 years, so the band decided to start a collaboration with one of the biggest not for profit organizations in this subject: CEAR. Over 350,000 people have been attended and helped by CEAR in the last 10 years. The non- for-profit organization has been working for 40 years in awareness, education, social integration and international human rights. ‘Untie the ropes’ and KOMRAUS will be a bridge to communicate in other territories the job that CEAR (the Spanish Commission helping refugee’s) does and in particular for the LGBT community. All funds from the single, merch and concerts will be directed to CEAR.
The song was recorded Live in one take (as all the other songs in the upcoming album) at Andy Whitmore Studios in West London (Lemar, Eternal, Elton John). The band keeps the magic and communication of the live performance in this unique recording.
The empowering music-video of Untie the ropes will see the light on the 6th of November, coinciding with the headline show that KOMRAUS organizes at The Victoria in London to raise funds for CEAR (Spanish Commission Helping refugees) and for the LGBT Refugees. The music video follows the aesthetic of previous KOMRAUS music videos, always directed by the talented Pedro Caxade, who has worked before for Channel 4, Sky TV and in a film with the likes of Aidan Gillen. He has shaped the magical visual world of KOMRAUS in their brand image and music videos. The new video will be another sign of the well looked after artistic and musical work of the band.