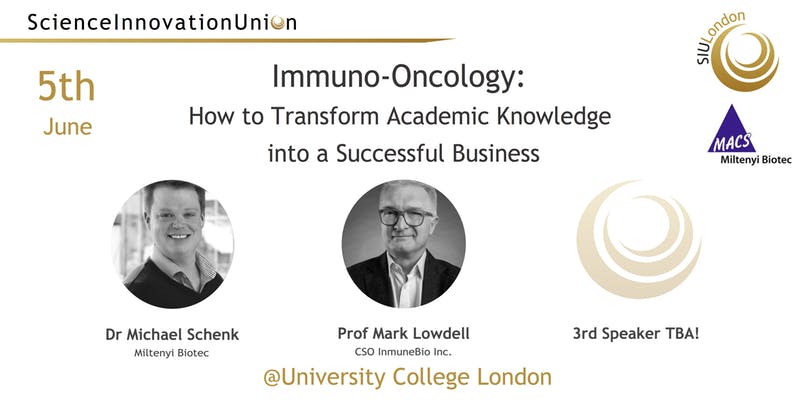 Interested in Immuno-Oncology and Entepreneurship? Join the Science and Innovation London team for talks and discussions on how to transform academic knowleadge into a succesfull business by our three speakers! Network with the speakers and peer researchers at the wine reception following the event!

Mark Lowdell PhD FRCPath FRSB is a Professor at University College London and p/t CSO of InmuneBio Inc.; a US biotec company specialising in innate immunotherapy. He holds MHRA Qualified Person status for the release of ATMPs for clinical trials and is the current Vice President (Europe & Middle East) of the International Society for Cell Therapy.

With over 25 years’ experience in adoptive immunotherapy of cancer he has focussed on the role of the innate immune responses; especially the role of natural killer (NK) cells.Professor Lowdell led the technology transfer of his own adoptive NK cell therapy product into three commercial CMOs in the US and was the chief scientific officer for the US clinical trial.

He now leads the UK phase I trial of INKmuneTM, and hosts the team of immunologists developing the next generation of NK immunotherapies for InmuneBio Inc.

“Having completed his Masters in Molecular Biology and Virology at Imperial College London, Michael joined Jon Gibbin’s lab at the University of Reading to start a PhD on the immune-modulatory role of platelets in Malaria. In 2012; having completed his PhD, he stayed on as a Post-doc studying the role of thiol isomerases in platelet receptor activation. It was during this time that he specialised in the field of flow cytometry and intra-vital microscopy. After working for several years as a technical specialist at The University of Reading, Michael moved to industry to start a career at Miltenyi Biotec as an Application Specialist. Since joining in 2017 as a Clinical Application Specialist at Miltenyi Biotec, Michael has progressed to become a Clinical Account Manager, managing both Academic and NHS accounts in the UK, using both his experience as a technical specialist as well his extensive knowledge in Immunology to help assist in bringing academic projects into the CGT clinical field.”

This event has been organised in collaboration with Miltenyi Biotec