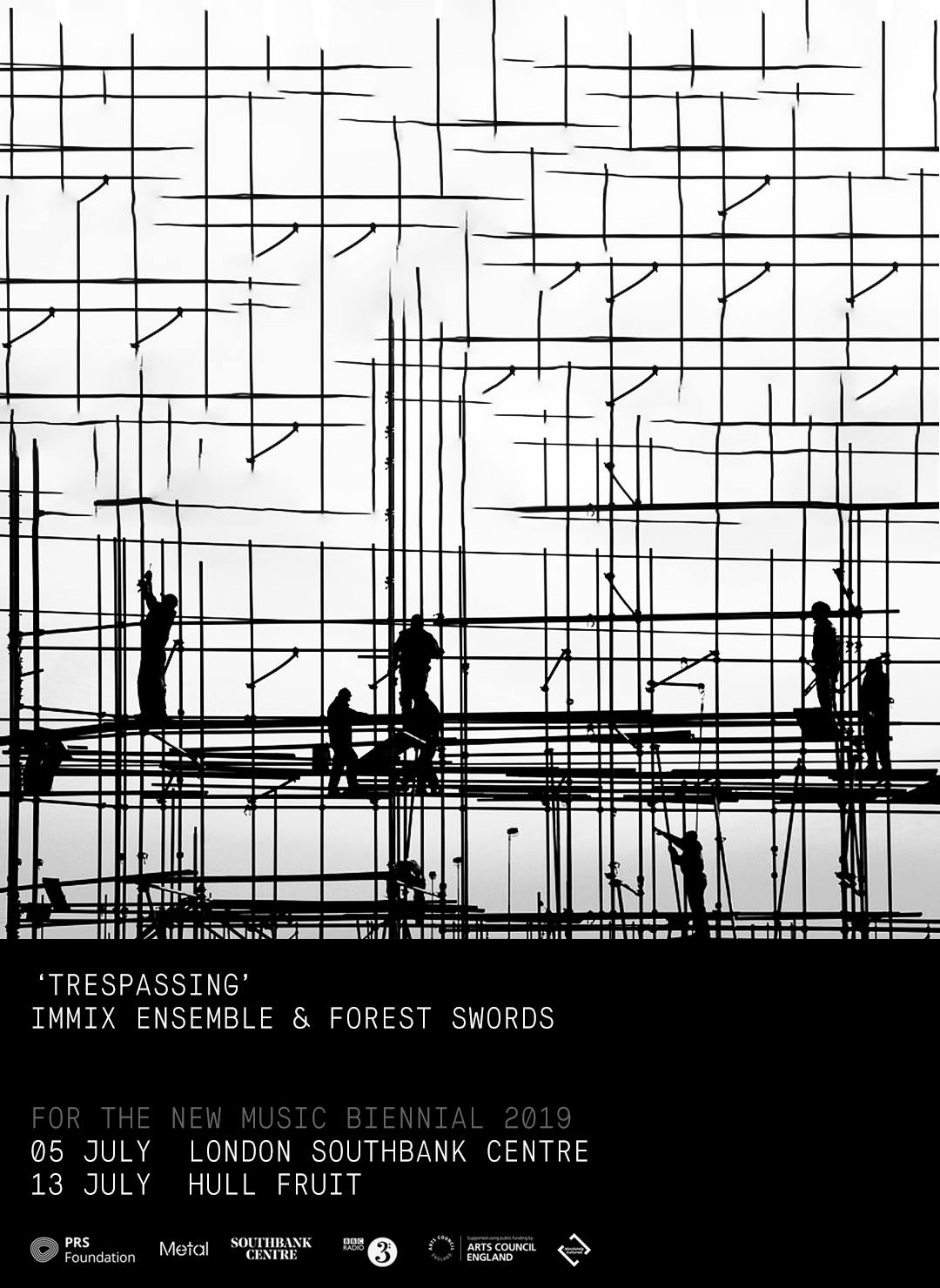 Debuting at New Music Biennial, a new collaboration between Immix Ensemble and Forest Swords seeks to investigate our rapidly transforming cityscapes, and how we exist within them.

Trespassing uses construction blueprints, field recordings and architectural data as a starting point to synthesise a new musical piece. Deconstructing the new-build developments emerging across British skylines – apartments, prefabricated office blocks and retail environments – the piece takes the gleaming materials and frameworks of these spaces to map out a composition that merges contemporary classical instrumentation and electronics.

Focusing initially on Liverpool, the piece highlights the tensions of cities torn between past, present and future: its layered identities becoming increasingly confused. Trespassing is the first stage of a project that examines the future of the places we live: how do we feel ownership over our public and private spaces when things change so rapidly? And what effect might these new developments have on how a city actually sounds?

“All of us have roots in Liverpool” says Barnes, “and have seen the consequences these new constructions have had on the way a city functions and how we engage with it – emotionally, physically, and in terms of how we listen to it too. It’s a story being played out across all British cities, and the impact on communities and cultural spaces is being felt in a powerful way.”

Immix Ensemble formed in 2014, as part of a Metal Time and Space residency, to join up the conversation between the classical and pop music voices within the city. Signed to acclaimed label Erased Tapes, they are now in their third series of unique, collaborative performances.

Since the release of his two celebrated albums, Engravings and Compassion, Forest Swords has collaborated with Massive Attack, remixed Bjork, and was a recent curator in the DJ-Kicks compilation series. He has also explored multidisciplinary work in the form of Shrine, a contemporary dance piece.

The New Music Biennial is a PRS Foundation initiative that supports and provides a platform for organisations and music creators who are pushing the boundaries of new music in the UK. It creates a world class programme of commissions, performed across the UK, broadcast by BBC Radio 3. 2019’s participants include Shiva Feshareki, Gazelle Twin, London Contemporary Orchestra and more.

Trespassing, commissioned by Metal and produced by Absolutely Cultured and Southbank, is to be performed at London’s Queen Elizabeth Hall on July 5 and Hull’s Fruit space on July 12. Free entry.

The London show is followed by an afterparty at the Southbank Centre featuring Forest Swords and Lotic DJ sets.