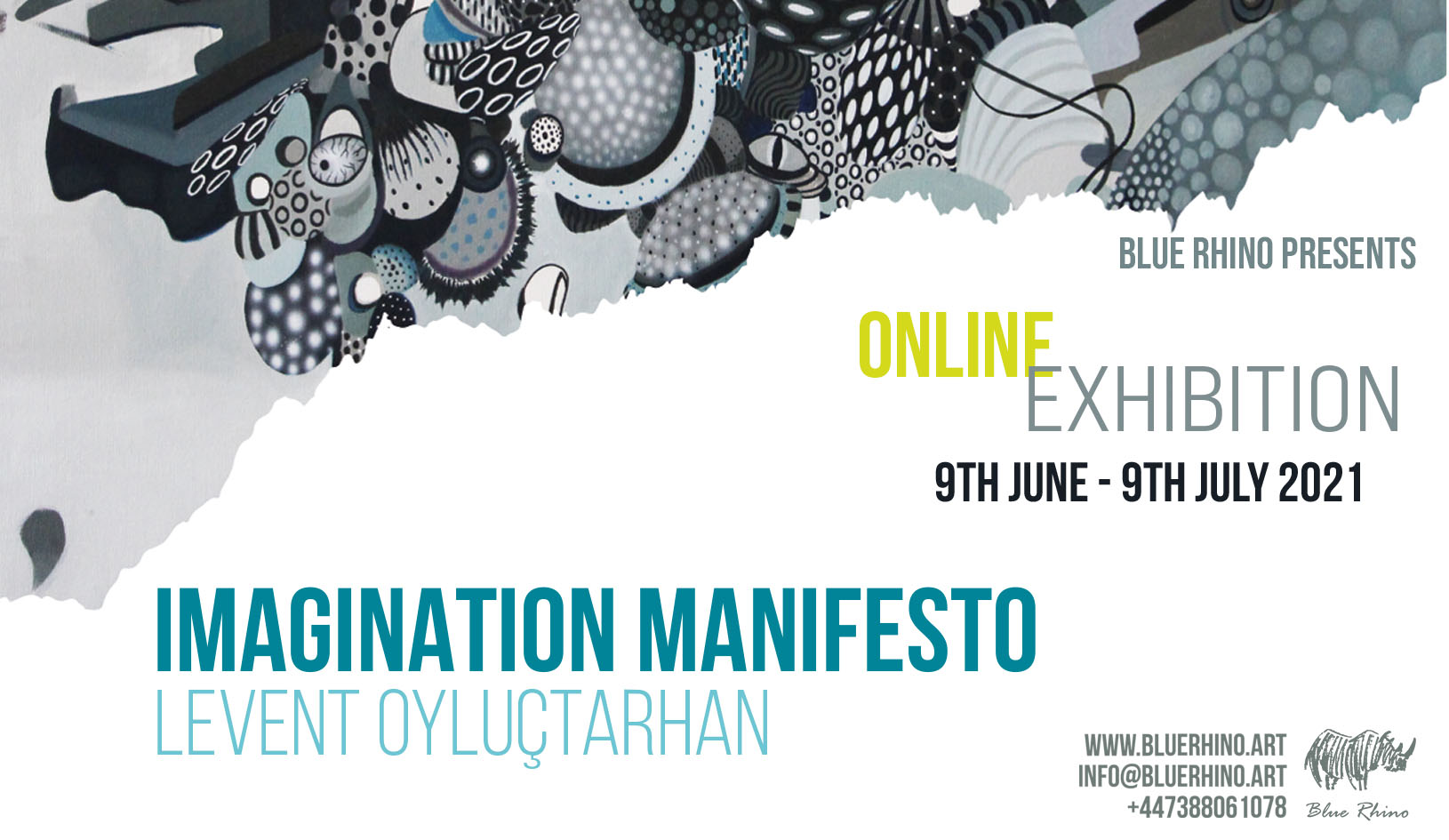 Imagination Manifesto, a solo presentation of works by Turkish artist Levent Oyluçtarhan, invites the viewer into a world with continuously shifting shades, textures, and tones. Oyluçtarhan’s paintings brim with an amalgamation of forms and patterns that can be found only within the artist’s vision.

Oyluçtarhan’s work embodies a narrative in which imagination challenges objective values. People, animals, places and metamorphosed forms are hidden amongst colours and textures; at any one time these figures can inhabit earth, sea or space – concurrently, at times. His research is concerned with the way in which abstract patterns can coexist within concrete forms – thus posing the question: can objective values find a place within an imaginative reality?

The visuality of Oyluçtarhan’s paintings is reminiscent of Picasso’s work on the complexity of forms. The works in the exhibition that adopt a monochrome palette suggest a reference to the Cubists’ experiments with depth perception, and working with the technique of grisaille. The series of works that make use of grisaille are distinguishable by their sole use of black and white. However, in contrast to this minimal palette, the rich figurative components of these works make use of distinctive textures and brushstrokes. The striped backgrounds found in the monochrome series are not only suggestive of flags and clothing patterns, but allow the figures in the foreground to appear more voluminous.

Oyluçtarhan’s works in colour are awash with expressivity, further emphasized by the undulating shades and tones, from deep blues to glowing neon. According to Oyluçtarhan, colour is a very effective tool with which to invoke emotion. The entanglement of bodies leads the viewer to consider the emotional compound of the paintings. Looking closely at the interlacement of the figures, one encounters natural elements and metamorphosed forms such as flowers, and the tails and horns of animals.

The combination of vivid neon colors, disfigured human body parts and distorted facial expressions encourages the viewer to unravel the tangle of Oyluçtarhan’s fantasy world. These figures create their own movement across the composition; they exist within their own imaginative reality.

”I see colour as a gateway to my world, which I project onto the canvas. Then comes the tissues; then the forms I hide between the tissues. Once this is coupled with the imagination of the viewer, the story begins. It makes sense to me that the viewer is involved in my paintings by looking at them with their own cultural background and unique imagination.

I think every colour speaks to a different emotion. Considering the varying hues that inhabit my work, we find ourselves adventuring through an unlimited narrative. In my paintings, I add colours, forms and textures. I’m creating deformations, metamorphoses; I think it’s all a combination of riches. It is an example of how differences can coexist – it’s the harmony of multiple voices.

Art is an adventure. Sometimes it’s full of surprises. In each of my paintings, the viewer embarks on an endless journey. Every time you look at my work, you see a different form, a different shape. With my paintings, I invite you to step away from the reality of the world and embark on a journey into the world of dreams”.
– Levent Oyluçtarhan