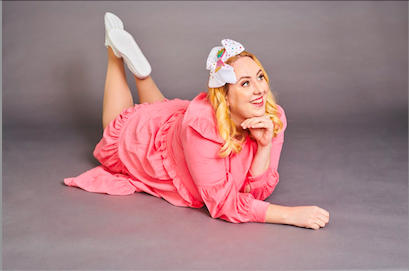 “A personality that will fill a stadium…

Helen Bauer is basic, well, basic-plus, because she is aware of it. 2019’s Best Newcomer nominee has announced her first UK tour starting on Wednesday 28th September at the Edinburgh Stand culminating with five nights at London’s Soho Theatre from Tuesday1st – Saturday 5th November. This follows a month-long run at the Edinburgh Fringe Festival’s Pleasance Courtyard.

Her new show, ‘Madam Good Tit’, is about self-confidence, self-esteem and self-care.  After the sell-out success of her debut hour, ‘Little Miss Baby Angel Face’, at the Fringe and a prestigious Soho Theatre run that followed, the past year has seen Helen’s star truly rise with laugh out loud appearances on Live at The Apollo (BBC 2) and The Stand-Up Sketch Show (ITV2).

This comedy powerhouse also had her own BBC Three show, ‘Small Doses’, released at the end of March on BBCiPlayer, made by the producers of ‘Feel Good. Helen also co-hosts two critically acclaimed hit podcasts: ‘Trusty Hogs’ with Catherine Bohart and ‘Daddy Look At Me’ with Rosie Jones.

Taking care of yourself has never been more ‘in’. Inspirational quotes and facemasks are a big industry, and, like all her friends, Helen is trying to ‘be the change she wants to see’. However, like everything else, self-care is a money-making business filled with influencers that get you when you are down and you are truly stuck. Helen has lost so many hours watching ‘Yoga With Adrienne’ instead of going out for a walk…

She grew up watching the ‘damaging’ reality diet TV shows that ran in the noughties. But was it really worse than what is supposed to help us now? In 2002 a famous cereal advertised to young girls that they needed to stop having lunch and just have another bowl of cereal. Helen Bauer was 11 and living in Fleet, Hampshire, and her friends also fell into the same trap of addictively watching these shows. Body image issues will never end. Our mothers, our grandmothers – it’s a wonderful tradition passed through generations ‘Here darling, you have my eyes and my unhealthy relationship with food.’ Just like two peas in a pod.

Self-care, like anything to do with ‘self’, isn’t about how you feel, it’s about how other people feel about you, their perceptions affect your brain. Now we are living with COVID, who is watching out for others? Who looks after No.1? Statistically, men survive because they save themselves, where women hold back to help and gather things. We will gather anything apart from our self-esteem to save ourselves.

After a childhood spent in museums riding the earthquake simulators and going into museum trench and blitz experiences, Helen believes she can take on these challenges with no real-world training. Helen explores her own self-esteem and experiences with secret eating, reality tv shows and, of course, her mother being thinner than her.

“a force of nature who commands the stage. She may be 6ft 1in, but her personality is even bigger and uses it to maintain absolute control. This is an impressive calling card of a show, rightly earning its place on the best newcomer shortlist.”           CHORTLE ****

“Bauer’s set is so supremely confident that it’s hard to believe this is her first full-length Fringe show. There’s no filler to be found and she’s in total command of the room throughout a high-energy performance: Helen Bauer is already an assured and accomplished presence. “

“her material is hilarious, and her crowd work is some of the best I’ve ever seen, switching between crowd work and material seamlessly. Helen is a natural storyteller who doesn’t just tell jokes, she really brings them to life…”               I TALK TELLY ****

“Bauer’s show is faultlessly put together. She’s committed to performing with an energy that is endearing, her ability to involve the audience has the confidence of someone who has been on the circuit for many years.”            BROADWAY WORLD ****

“It is Helen Bauer’s debut Fringe hour but I think it appeared to be anything but that. Helen is a larger-than-life character; confidence oozes out of every pore as she grabs the gig by the scruff of its neck and doesn’t let go until the very end. The enthusiastic reaction to her show from both the industry and the public alike is well merited and her future looks both assured and bright.” ONE4REVIEW ****

WATCH HELEN IN ACTION AT LIVE AT THE APOLLO:  https://www.youtube.com/watch?v=mvhDEFCtui0&t=66s

The dates are as follows: