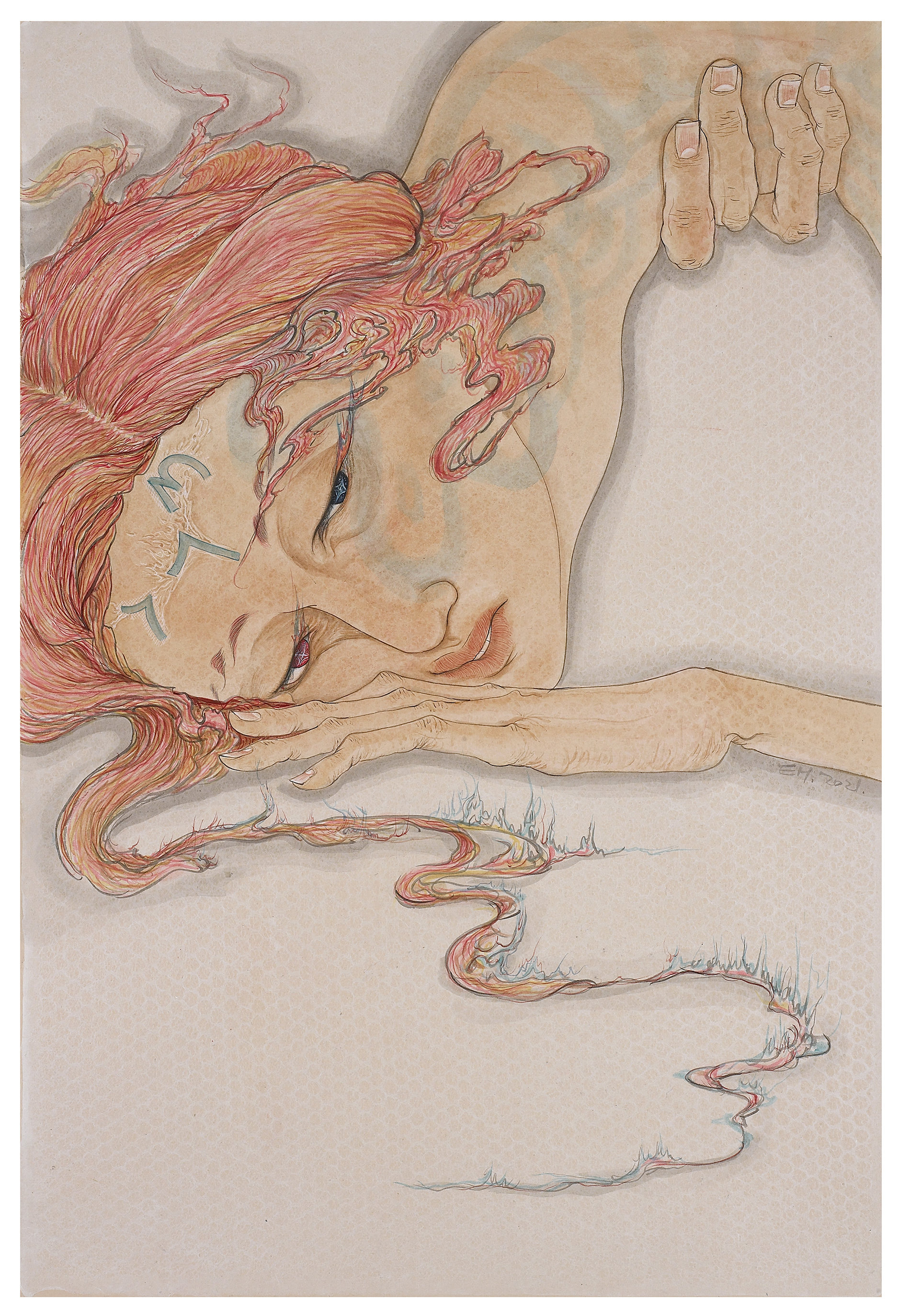 What does it mean to mythologise a place, person or memory? And how do these stories shape our perception of the world, history and different cultures? These are the questions that Edouard Baribeaud, Tae Kim and Tendai Mupita explore through richly layered visual narratives that blur the boundaries between ancient and contemporary, spiritual and temporal. Legends, the latest group show at Kristin Hjellegjerde Gallery’s Wandsworth space, presents a diverse collection of works that contemplate stories’ powerful psychological and emotional impact.

For this exhibition, French-German artist Edouard Baribeaud explores the transformative and elusive qualities of light about identity and narrative. For example, the diptych entitled George and Theodora is inspired by the vivid memory of a striking couple. The artist once encountered at a party and Paolo Uccello’s painting of the legend of Saint George and the Dragon. In his work, Baribeaud recasts the couple into a modern-day version of the myth, but the roles are reversed so that the princess appears as the protagonist (the knight). The painting Sebastian similarly brings together the contemporary and the classical, taking its departing point from another brief moment witnessed by the artist. In this case, Baribeaud was struck by an illuminated entrance hall of a building at night. “The reflections of the street lights on the glass doors and the mirrors inside the building created an almost psychedelic effect,” he says. “I thought it would be a perfect stage for a painting.” In the image, an elegant man waits in the hall, as if caught in the threshold between two worlds: the interior and the exterior in both a literal and metaphorical sense. Alongside these paintings, Baribeaud has also presented three drawings, created in collaboration with his partner Sophia Andreotti, which take the format of tarot cards and illustrate imagined characters representing visions of the present and the future.

Seoul-based artist Tae Kim’s delicate paintings form part of an ongoing series entitled The Faceless Gamer, which explores the heightened emotional experiences of the gaming world and the complex notion of identity within this realm. Each work depicts a hybrid being, a deity-like figure, in a distinct psychological state. While these are Kim’s imaginations of players that she’s met in online battle games, the portraits meditate on how the distinction between digital and actual is becoming increasingly blurred and how that might impact not only our perceptions but also how we connect and socialise. Significantly, the artist employs techniques used in ancient Joseon dynasty portrait paintings, which aristocrats and royalty mainly commissioned to illustrate their status, wealth and intelligence. By drawing on this tradition, Kim elevates alternative characters and hybrid digital experiences as part of a historically significant cultural shift that offers a fluid, creative space for people from different backgrounds to come together and shape their narratives.

Zimbabwean artist Tendai Mupita’s practice is deeply rooted in the rich heritage and stories of Shona culture. Large portions of his compositions are composed of tiny brushstrokes that create intricate, repetitive patterns that imply a sense of texture and movement and invite the viewer to examine the surface more closely. For this exhibition, the artist presents a captivating new series of works that explore specific cultural ideas and rituals around death and grieving. For example, many traditional Zimbabwean kitchens feature a stoop-like structure that serves a functional purpose as a shelf for cooking pots and water storage. Still, it also becomes an altar where the coffins are laid, and people go to communicate with their ancestors. Mupita depicts a figure kneeling at the stoop in one painting while a god-like form appears rising amidst the patterning. While this intimate connection between life and death may seem morbid from a Western perspective, Mupita’s use of gentle, uplifting hues suggests a sense of harmony and connectedness.

Similarly, in another artwork, a hybrid human figure appears draped over a coffin or grave; However, there is undoubtedly something unsettling or even monstrous about the scene. The regularity and expansiveness of the blue and white patterning in the background have a calming effect. At the same time, the organic, circular forms nod to the natural life cycle.

These works initiate an intriguing dialogue between colour, form and texture that emphasises art’s ability to both communicate complex non-verbal experiences and break down the boundaries between different cultures and histories.

Upset The Rhythm posted a new event. 1 day, 10 hours ago