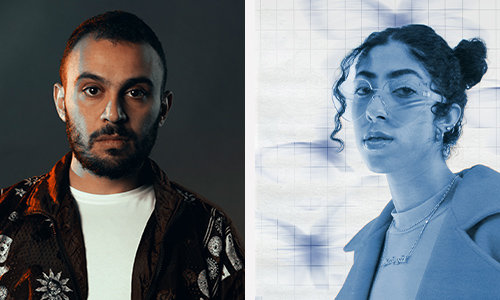 One of Shubbak Festival’s flagship projects for their 2021 edition, this stellar collaboration was commissioned to bring together two of the Middle East’s most captivating rappers for a double bill concert and new song debuts.

Exclusively for this summer date, The Synaptik and Felukah live together at London’s legendary Jazz Cafe, which will also be streamed for their global audiences. Enjoy an energetic evening of pioneering sound like two of the most sought-after new-wave hip-hop, rap and trap talents perform solo sets before debuting their two collaborative new singles together.

The Synaptik is a Palestinian-Jordanian rapper at the forefront of a new wave of Arabic rap and trap. With a steady string of new releases, including numerous iconic collaborations with the region’s hip-hop heavyweights, his distinctive voice and potent lyrics have cemented him as one of the pioneering artists of the Arabic-speaking world.

Exploring issues such as migration and social inequality, The Synaptik has been able to take the region’s pulse and broadcast it worldwide through his infectious beats.

Combining her Cairo heritage and the New York City that adopted her, Felukah is a rapper and poet whose work glides between English and Arabic.

From classic Arabic musical icons, US hip-hop legends and contemporary prose writers, she pays homage to her past and present, exploring womanhood, diaspora cultures, and self-expression and was dubbed by Scene Noise as ‘the neo-soul artist bringing the Nile to New York’.

Presented in partnership with MARSM, a new collaboration commissioned by Shubbak Festival. Produced and programmed by MARSM.