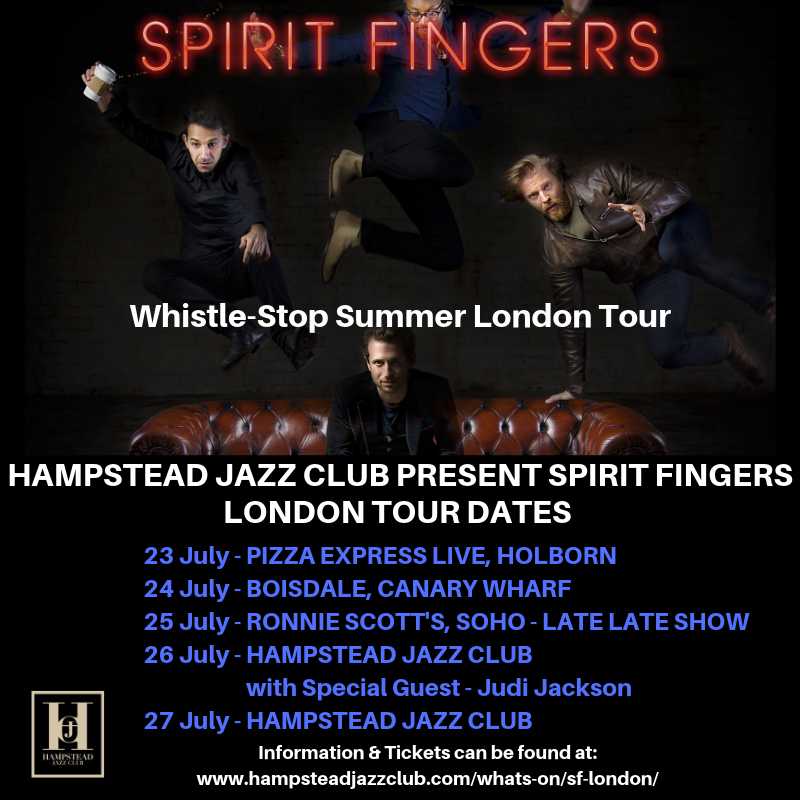 ‘If you’re in the mood for the high-fusion era of Stanley Clarke and Al Di Meola, this will definitely do it for you.’ Stereogum

To celebrate the release of their critically acclaimed debut album on vinyl, Los Angeles jazz-fusion masters, Spirit Fingers, have announced a whistle-stop Summer tour of London’s most prestigious jazz venues. Over the course of five nights in July, this incendiary quartet will be performing at Pizza Express Live, Boisdale Canary Wharf, Ronnie Scott’s and the capital’s coolest new venue, Hampstead Jazz Club.

To see Spirit Fingers at one of these venues please go to: http://www.hampsteadjazzclub.com

Having cut his teeth working with the Miles Davis Electric Band and the Buddy Rich Big Band, virtuoso pianist Greg Spero spent several years touring with chart-topping R&B and pop artists including The Weeknd and Halsey. Itching to dive back into deeper, jazzier waters, Spero spent a year composing the music that would go on to make up their first album before forming Spirit Fingers alongside guitarist Dario Chiazzolino, bassist Hadrien Feraud and drummer Mike Mitchell, three of the finest musicians on the West Coast.

A heady cocktail of cool jazz-fusion and fiery funk that seamlessly blurs the boundaries between Brad Mehldau, Al Di Meola and Herbie Hancock, Spirit Fingers’ debut album has received a raft of rapturous reviews in prestigious American publications including the Chicago Sunday Times, Stereogum and Downbeat. Like all of the best bands in the long and winding history of jazz, Spirit Fingers somehow manage to be tight but deliciously loose at the same time. Now they are ready and raring to show audiences on this side of the Atlantic what all the fuss is about.