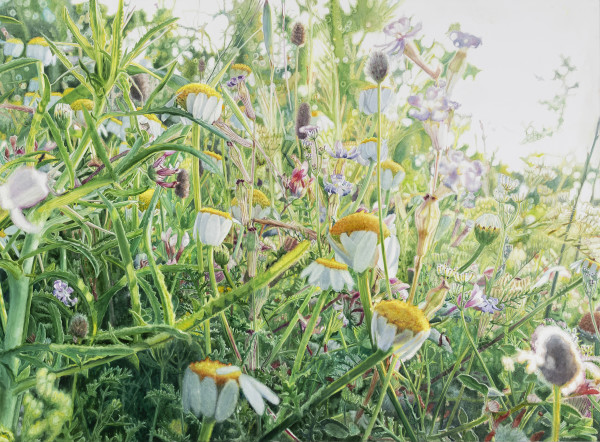 Tall stems of flowers, grass and reeds tower against the sky as soft sunlight streams through their leaves. Norwegian artist Vibeke Slyngstad’s exquisitely rendered paintings take the perspective of a small child playing in the earth, running through fields, wading through streams, squinting into the sun. However, these are not works of nostalgia; the beauty Slyngstad depicts is fragile and wavering just as the landscapes themselves are transitional, caught between the rural and the urban, the land and the sea. Instead, Dor Beetles Slumbering at Dusk, the artist’s solo exhibition at Kristin Hjellegjerde Gallery London, takes these rugged, mysterious edgelands as a way of exploring complex psychological states.

Slyngstad works at a slow, meditative pace, precisely rendering each image using a single layer of paint so that the finished surface has a delicate, almost translucent quality, reflecting more expansive notions of liminality. Although the compositions are inspired by the artist’s photographs of real-life encounters with nature, the vivid hues and magnified perspective of the plants against a blank, white sky suggest a heightened view or dreamlike state rather than any specific geographical location. Meanwhile, Slyngstad’s plays with materiality to evoke a fluctuating sense of perception, almost as if we are dipping in and out of consciousness. From a distance, the exacting details, blinding bursts of light and contrast between sharpened and blurred edges, which mimic the flash and zoom of a camera, create a stunning impression of photorealism. Still, on closer inspection, the artist’s presence becomes visible through delicate, irregular brushstrokes and subtle imperfections where the colours bleed out of the lines or the paint streaks. “It is essential to me that the works have a humanity and honesty about them,” says the artist. “The viewer can see every mark.”

At the same time, the visible fragility of the work creates a slight air of tension or perhaps, even anxiety. This is probably most keenly felt in the series of paintings entitled Shuafat, named after a predominantly Palestinian neighbourhood in East Jerusalem. The artist encountered a sizeable vacant area of urban land, overgrown with flowers and weeds breaking through the cracks in the concrete. Slyngstad was struck by the beauty and persistence of nature against a backdrop of conflict and hardship and continues to return the same imagery, playing with the crop and scale to create fresh interpretations. In this exhibition, the landscape is depicted at a large scale, taking on an almost hyperrealism that heightens both a sense of drama and vitality. Meanwhile, the artist deliberately chooses to work in a bright colour palette to convey a feeling of optimism that relates to notions of renewal and rebirth as enacted by the natural life cycle. Each painting offers a window into a microcosmic world that captures the harmonious relationship between deterioration (the drooping white petals of the daisies) and growth (the lush green foliage), whilst the works’ materiality the intensity of detail creates an odd, pervading sense of unease.

These ideas are further explored in the series Sønstegård, named after an area of protected wetlands in Norway close to Oslo, where the artist is based. These paintings depict a sparser landscape of reeds and grass growing on the banks of a body of water. Rendered in dark tones of purple, pink and red, they evoke the cusp of nightfall, once again playing with notions of transition and perhaps, reflecting the experience of memory as a wavering psychological place that’s continually in the process of fading. Like the landscape of Shuafat, we find ourselves simultaneously drawn in by the beauty and held at a taut distance.

The exhibition’s title reflects this layered perceptual experience by evoking the poetic image of a beetle slumbering in the undergrowth, caught between a state of sleep and wakefulness as the day transitions into the night. Although the beetle is not depicted in any of the paintings, we can perhaps read it as a metaphor for ourselves, the viewers, drawn deep into Slyngstad’s vivid, intricate worlds.