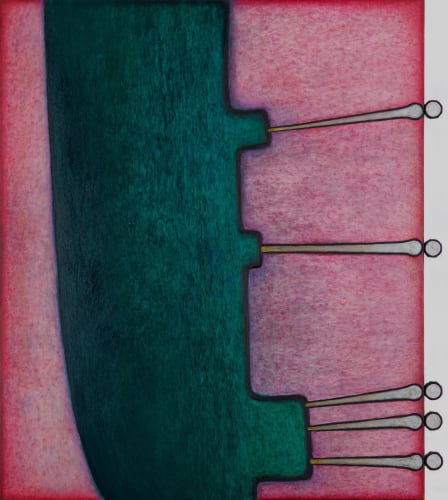 Kristin Hjellegjerde Gallery is pleased to present Breezy, a presentation of new paintings by Gabriela Giroletti at the gallery’s Wandsworth location. Breezy is her first solo presentation with the gallery and is on view from November 19th to December 18th, 2021.

To look at Giroletti’s work is to be enveloped in an animated terrain where swollen masses with shimmering surfaces writhe and crawl, locked into what seems like a territorial competition. In amongst the maelstrom, roots get diverted, growths get stunted and billowing excesses crunch. Our vantage point onto this world shifts from painting to painting. At times we appear to be above ground. At others, we have fallen down a rabbit hole and are tunnelling under the earth. But as we turn the burrow’s bends, the walls shift like tectonic plates before transforming back into the sky, revealing the inside to have been outside all along.

Giroletti is interested in the notion of the in-between, and the paintings are full of things on a journey from one state of being to another. The landscape undergoes this restless mutation, and the forms that inhabit it often seem to be expanding beyond their capacity or deflating as the animating energy leaves them and moves onto something new. Indeed breeziness, the sense of movement in the flickering planes that are to be found throughout the work, is itself an in-between condition; neither windy nor still, Breezy accelerates and decelerates indecisively between the two.

This stirred motion is rendered by layers of delicate directional brushstrokes of varying hues that build into a diaphanous pointillism. In “Heat Haze”, for example, streams of fizzing dots intermingle, generating ripples of modulating the intensity. In “Spatial Places”, these dots throb and scatter like water droplets on a train window. Again, radiation or gaseousness come to mind, not least when the skies gleam amber orange or sap green.

The more minor works are more fragment-like. They lean towards inert mineral colours, like charcoaled fossils or bits of rock. In paintings like “Tralalitions” or “Last Not Least”, the paint is heaped, dug and scraped, making the surface seem like part of an excavation. Here, subtle variations of tone poke through the mottled texture, echoing the optical energy of the larger paintings.

Spatial disjuncture is another theme that underlies the work. In the smaller pieces, devices reminiscent of collage techniques, like cuts and fold-ins, are experimented with. For instance, in “Some Things Cosmic II”, thick seams appear between the forms, stitching them together into assemblages. Also, an adjunct, in the form of a perched mound of paint, materialises on top of the stretcher bar as an extension of a shape within. This causes the painting to flip ambiguously between pictorial space and objecthood.

These experiments get scaled up in the more significant works where they evolve further. For instance, in “Transparent Things”, the seams between the forms are accompanied by an overlaid fade and a drop shadow. Both elements have widths that remain constant round, stamping out the edge, emphasising its status as a border. And in “Compass”, dark orbs that start by hugging internal thresholds within the picture escape and re-appear as separate panels on the wall. This melding together of different spaces creates an array of formal possibilities, and our attention is drawn to the innovative decisions that have taken place in the making process. As we witness the development of the devices from painting to painting, we start to imagine what it would be like if we combined them differently, taking a bit from one image and placing it on another, like pieces in a board game.

The use of emptiness in work also conjures up this sense of possibility. Although Giroletti draws from everyday life when conceiving her compositions, most real-world details are stripped out, leaving the shapes smooth, striated surfaces. Giroletti doesn’t seek to represent the specifics of particular objects so much as the relations between them. This use of voids, cuts and in-between states is what makes the arrangements inherently open and playful. The viewer feels on the verge of stepping into the frame, picking up one of the forms, and participating in the world-building themselves.

About Gabriela Giroletti
Gabriela Giroletti (B. 1982) is a Brazilian painter living and working in London. She graduated with a BA in Fine Arts from Middlesex University, London, in 2015 and received her MFA in Fine Art from the Slade School of Fine Art in 2018. With her work, Gabriela explores the relationship between the painted image (the meaning, the immaterial, the metaphor, the mind) and the material presence in the painting (the human, the touch, the physical reality, the body). Deliberately ambiguous, the pictures fluctuate between their crude materiality and their metaphysical aspect, encouraging the viewer to formulate peculiar connections with our tangible surroundings as well as with individual and unique lived experiences.