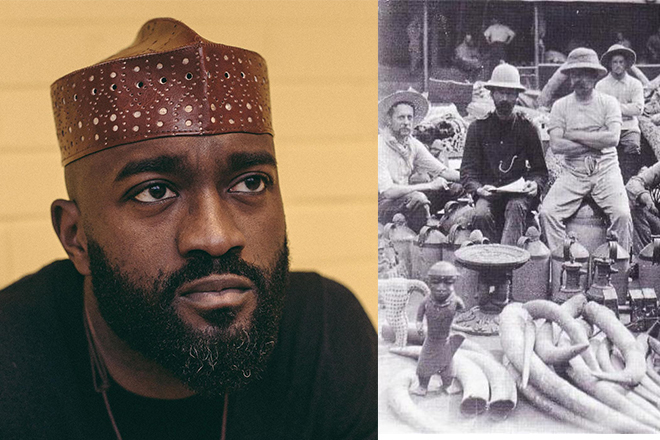 In February 1897, British troops launched a ‘Punitive Expedition’ on the Kingdom of Benin, swiftly and violently destroying much of Benin City and pillaging thousands of royal artworks and sacred objects. Many of the Benin Bronzes are now in the British Museum; the rest are scattered across Europe and America in private collections and museums. The Edo people have requested these artefacts back but most of the museums have staunchly refused.

Poet Inua Ellams, who hails from Benin City in Nigeria, will read his poem sequence Fuck/Empire, about one such artefact, a tusk, now housed at the Manchester Museum. He will then be joined by Nigerian artist Victor Ehikhamenor, Pitt Rivers Museum Curator and author of The Brutish Museums Dan Hicks and Manchester Museum Director Esme Ward in conversation with writer and broadcaster Afua Hirsch to discuss the history, the legacy and the thorny issue of restitution.

In partnership with Penned in the Margins.

Victor Ehikhamenor is an artist, photographer, and writer born in Edo State, Nigeria, whose politically motivated works are influenced by the duality of African traditional religion and the interception of Western beliefs, memories and nostalgia. He has had numerous solo art exhibitions across the world and is a Trustee of the proposed Edo Museum of West African Art.

Inua Ellams is a Nigerian-born, UK-based poet, playwright and performer who has written for the Royal Shakespeare Company, the National Theatre and the BBC. His latest play was an adaptation of Chekhov’s Three Sisters set in Nigeria, staged at the National Theatre. The Actual his fifth poetry release, and first full collection was published in 2020 by Penned in the Margins.

Dan Hicks is Professor of Contemporary Archaeology at the University of Oxford and Curator at the Pitt Rivers Museum. His award-winning research focuses on the restitution of African cultural heritage from Euro-American collections, focusing on the place of ideas of cultural whiteness in ongoing histories of colonial violence. His most recent book is The Brutish Museums.

Afua Hirsch is a writer, broadcaster and former barrister. She is a columnist for The Guardian, writes for magazines including VOGUE, Time and National Geographic and her book Brit(ish): On Race, Identity and Belonging was a Sunday Times bestseller. Her documentaries have included African Artand Enslaved and she has worked in development in West Africa and in international human rights law at the bar.

Penned in the Margins is an award-winning small arts organisation producing new work live, in print and online.

Dan Hicks’ The Brutish Museum can be ordered from Pluto Press with a discount which you’ll receive you’re your event ticket purchase.

N.B. This is an online event. You will be sent a viewing link and password with your booking confirmation. The event will be available to watch afterwards with a new link, which you’ll receive after the event.