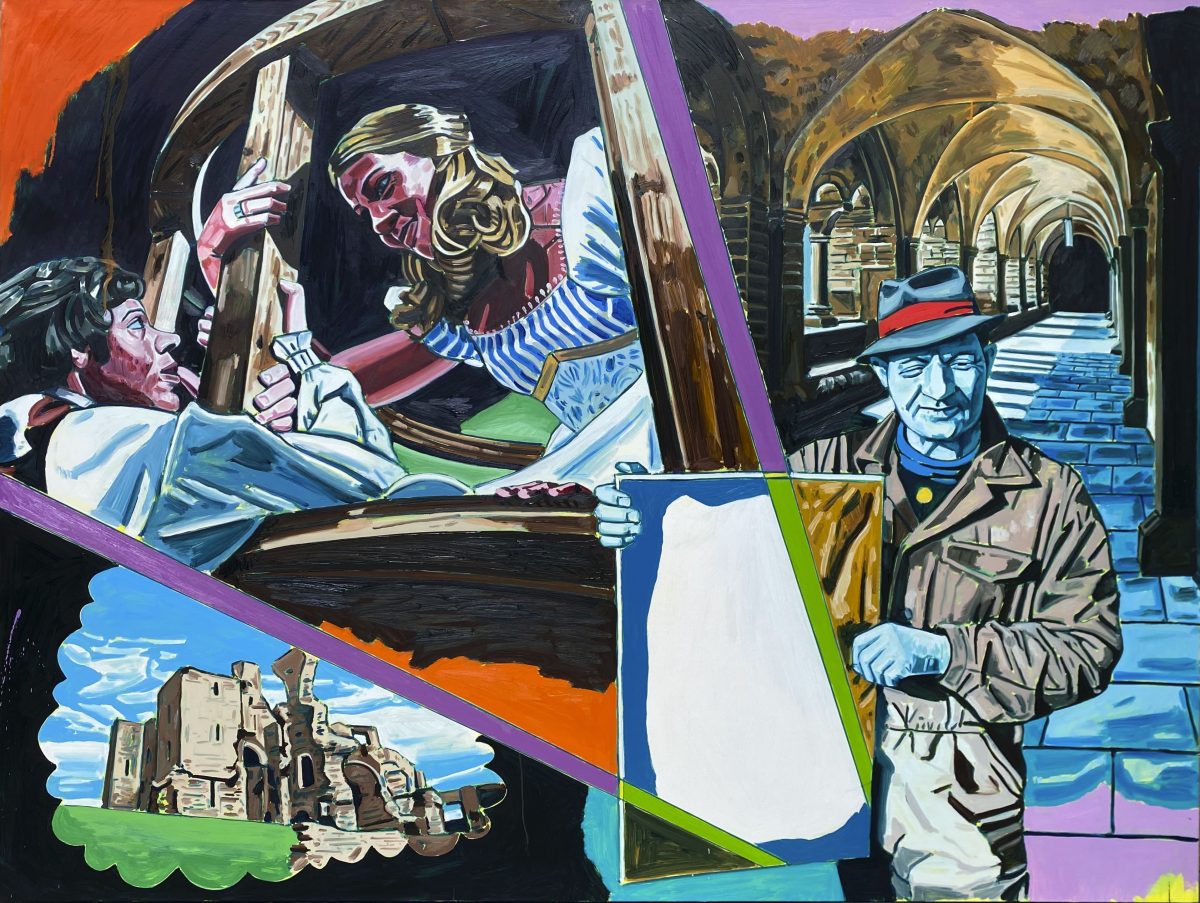 Vividly rendered characters appear against a collage of painted scenes that contrast romantic, pastoral imagery and bright, cartoonesque colours with crumbling gothic architecture and an underlying sense of foreboding. This latest collection of work by Lancashire-born, London-based artist Louis Bennett is partly inspired by Shakespeare’s The Tempest’s wild landscapes and heightened drama and explores the powerful yet destabilising experience of falling in love. Ariel, the artist’s second solo show with Kristin Hjellegjerde Gallery, marks a newfound optimism expressed in the flushed faces and youthfulness of the figures depicted. Yet, the splicing of the scenes suggests pervading anxiety and unease. In this way, the works can be understood as expressions of fraught psychological states that are deeply personal and register the wider complexities of human existence.

Bennett’s process typically begins with collecting found imagery and ephemeral materials that provide visual or atmospheric inspiration. For this latest exhibition, the artist cites The Tempest as a key influence. Some of the paintings allude to the play’s desolate maritime setting. In contrast, others directly reference Ariel’s character, who, in Shakespeare’s narrative, is a magical spirit. Still, the name holds deeper significance for the artist as it is also the name of his partner and a homophone of the word ‘aerial’. ‘The feeling of being airborne, floating above the ground, is how this time has felt, for me, meeting someone who feels otherworldly in a historical moment where we all feel completely untethered from any sense of normality and stability,’ he explains. ‘One of the parts of The Tempest that really touched me is the idea of Prospero being a character in exile, longing for a lost home, seeking to have former glory restored to him. In deepest lockdown isolation, I felt like this before my own Ariel arrived to save me from this feeling.’

Bennett also found himself drawn to the aesthetic of old French magazines, specifically the stylised fashion shoots of children posed in surreal scenarios that envision romantic cliches. While the artist’s previous paintings typically focused on the suffering of the older generations rendered in bleached, ghoulish hues, many of these latest works depict children with round, reddened cheeks dressed in dated clothing that further emphasises the notion of nostalgia and innocence. In the painting entitled Komm, Gib Mir Deine Hand (which references the German version of the Beatles song ‘I want to hold your hand’ ), a young girl is whispering something into a boy’s ear against the backdrop of a harbour at sunset. While the painting is cropped at waist height, an image exploding out of the boy’s head shows us not only that they’re holding hands but also that this moment of intimate physical connection is the overriding focus of his attention.

This technique of splicing images recalls the graphic style of comic books and Pop art. Still, for Bennett, it’s also a way of visualising the character’s mental state and the familiar experience of being in one place while your mind is in another. The painting Can’t Stop Thinking About It envisions another young boy, but this time he’s very clearly consumed by his thoughts. He is standing in a verdant green park but gazing off to the side of the canvas, mentally seeing an image of a man and woman embracing. While the narrative is intentionally left ambiguous, the romantic scene in which the couple appears is unsettled by the red, stormy sky in the distance, and the idyllic atmosphere of boy’s present is threatened by the looming presence of disembodied, blue hands, one of which is brandishing a hooked knife.

‘Some of the paintings in the show tackle mental health, particularly the experience of OCD, which I suffer with,’ says the artist. ‘OCD and love are very intertwined for me, and I think this is to do with a feeling of intensity and the extremity of emotions.’ This is most clearly referenced in the piece entitled Overcoming OCD in 12 Easy Steps, in which a little boy and girl are seated at the dining room table. At the same time, a bell clangs above the boy’s head, but feelings of detachment and anxiety are also explored in other paintings. O! Solitude! (After Purcell), for example, it is strikingly still and subdued compared to the dynamic, overlapping imagery of the other works. It is named after a vocal piece by the composer Henry Purcell and depicts a woman sitting on the edge of an archway, looking out over green rolling hills. Like many of the works in this exhibition, the scene is consciously romantic, drawing on the tropes of the pastoral genre to suggest an idyll. Yet, as emphasised by the title, it’s also an expression of a kind of loneliness that we all feel due to our inability to share our internal experience with another person.

However, the experience of love is envisioned by Bennett as both transformative and elevating. For example, the painting Approach Me, My Ariel directly references The Tempest’s narrative in which Ariel’s character represents kindness and magic, and here, the artist imagines ‘Prospero – embittered and trapped before being touched and humanised by the energetic sprite he commands.’ Here, Prospero’s transformation is suggested by the return of colour to his face, while a ruined, gothic church looms behind him as a symbol of the past. Still, wider notions of liberation resonate throughout the exhibition. For example, in the artwork It Was Written, a man stands at the end of an empty, arched corridor, dressed in a workman’s clothes. While he is confined to the left-hand side of the canvas, he is holding a half-painted canvas that connects his cold, archaic world with a scene of romance and a smaller image of a ruined castle. In this way, art or creativity becomes synonymous with love as a unifying force and a gateway to new beginnings.