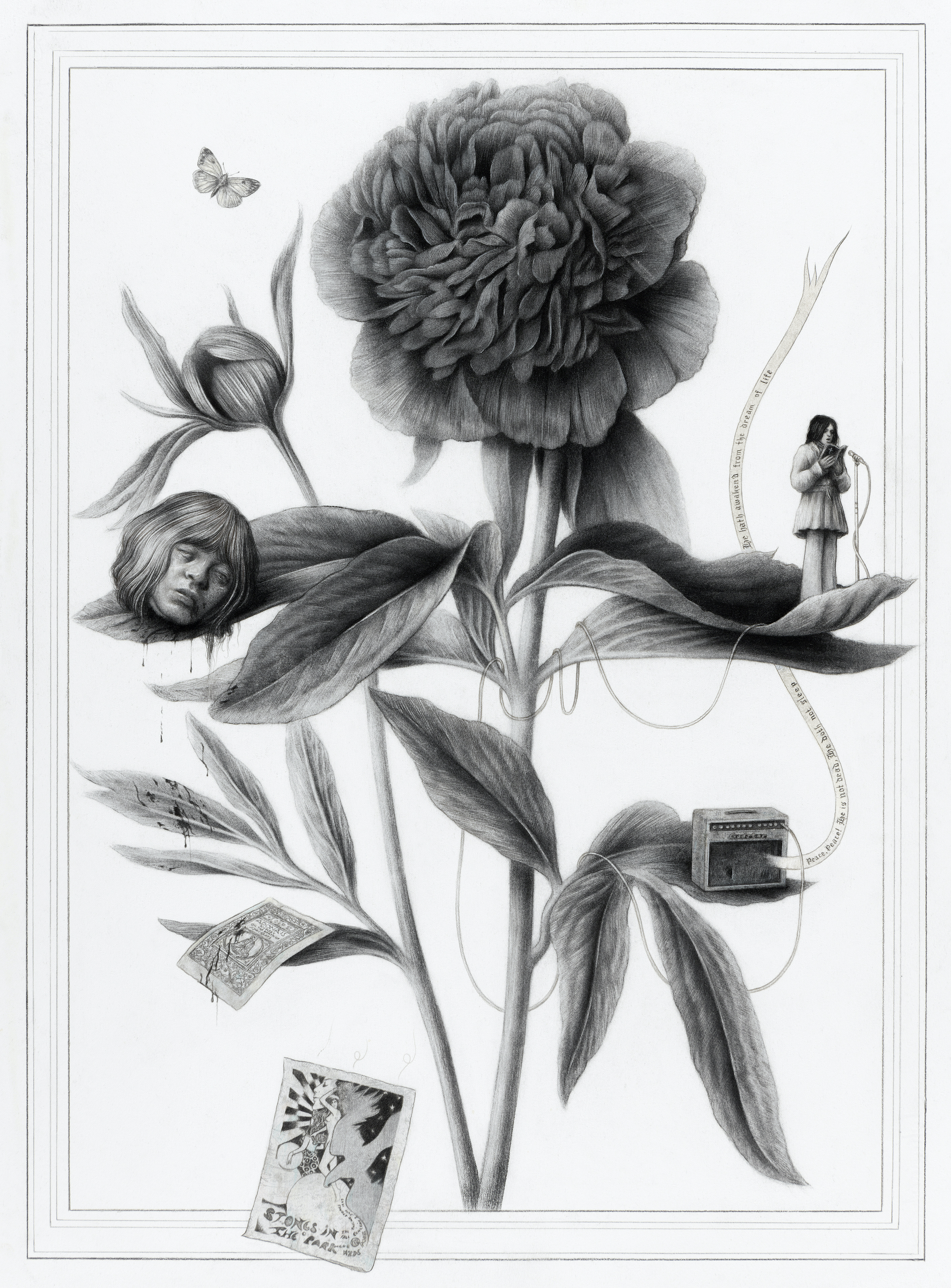 Surreal, fairytale-esque landscapes and characters are rendered in exquisite detail in Norweigan artist Sverre Malling’s latest collection of drawings. Each image weaves together a multitude of sources, converging allusions to contemporary mass culture with figures and symbols from art history and literature to create a richly layered visual narrative that cuts through the currents of time. His forthcoming exhibition entitled Adieu to Old England at Kristin Hjellegjerde Gallery’s Wandsworth space in London pays tribute to the diversity of England’s cultural and artistic heritage whilst also questioning the authority of conventional historic perspectives.

Malling has always been drawn to the illustrations and narratives from English folklore, taking a particular interest in ‘the eccentric, the lost heroes, the people who find themselves on the outskirts of the norm.’ This latest collection of drawings blends motifs from historic photography and art with the artist’s own fictional characters and landscapes, whilst the highly detailed aesthetic takes inspiration from Victorian illustrators and the fairytale tradition. In a similar way to fairytale narratives, many of Malling’s scenes appear innocent, playful and idyllic on the surface whilst the atmospheric charcoal shading and shadowy skies are suggestive of darker, macabre undertones. One drawing, for example, depicts an oversized floral plant surrounded by butterflies, but if we look more closely, the idyllic scene is complicated by a small skeleton (a traditional memento mori) at the plant’s base, and a group of small children brandishing long thorns with which they have speared the butterflies. Here, as in several of Malling’s artworks, brutality and innocence are not so much juxtaposed, but shown in coexistence to add a sense of mystery and depth to the narrative.

Amongst the most haunting of the drawings are six portraits, which reimagine eccentric characters from the recent and distant past such as the artist and occultist Austin Osman Spare (1886-1956) and the musician, performance artist and provocateur Genesis P-Orridge (1950-2020). Spare appears seated at his desk, dressed in an elaborate robe with monstrous artworks hanging on the wall behind him. The contrast between the opulent domesticity of the scene and his challenging outward gaze creates a palpable tension that underlines the complicated nature of representation. This notion is further explored in the portrait of P-Orridge who appears holding her dog ‘Musty Dagger’ and a miniature doll of her dead partner and soulmate Lady Jaye, surrounded by clashing bucolic and urban imagery. In the overhanging flowers, the words ‘Short Circuit Control’ make reference to accusations of abusive behaviour whilst P-Orridge’s proud expression and pose imbues her with a sense of dignity. By memorialising these controversial figures through art, Malling calls into question the concept of cultural iconography and thus, invites the viewer to reconsider how our understanding of history and culture has been shaped by conventional narrative perspectives.

This is most obvious in the exhibition’s title work Adieu to Old England. Both the title and imagery are borrowed from an album by folk musician Shirley Collins, who, in a similar way to Malling, collected and reinterpreted forgotten folk music. In Malling’s drawing, the composition has been rearranged to alter the hierarchy of the image. Here, the porcupine is the protagonist whilst the grand country estate is only partially visible in the background. ‘It is the fringes of culture that are the interesting, the odd detail, not the grand and predetermined,’ says the artist. In this way, his drawings can be understood through photo-ethicist Ariella Azoulay’s terminology as archaeological excavations of ‘potential history’, but it is not just the past that Malling reimagines, it is also our present and future culture. He is asking his viewers to wonder: what would the world look like if these forgotten figures from England’s history had become more deeply rooted in our collective memory?

In the context of our increasingly uncertain and fragmented modern world, Malling’s drawings encourage us to embrace new ways of looking at the past so that we might imagine and enact a more hopeful and inclusive present and future.