The Knight Divided with Richard Stone 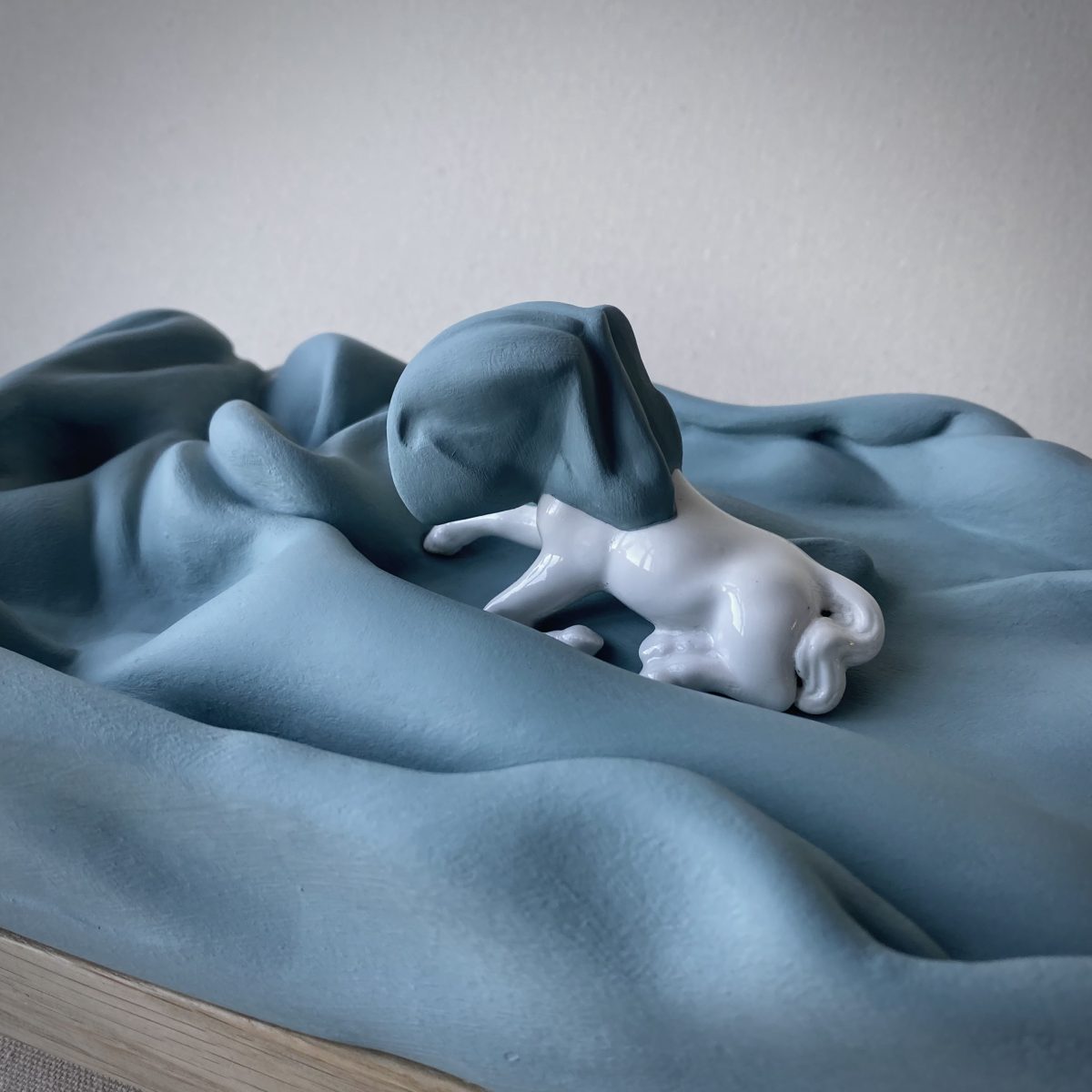 Fluid, sculptural forms evoke the wild, tumultuous movement of the sea or else, the uncanny stillness of a dense forest, both creating veil-like surfaces which alternately obscure and reveal the figures caught between. These latest works by Richard Stone reflect on the artist’s spontaneous sculptural process in relation to the physical materiality of clay, marble and bronze to explore wider perceived dichotomies between artistic conceit and authenticity, strength and vulnerability, resistance and surrender. Through deconstructed figures and sensual, curvaceous shapes, the knight divided, the artist’s third solo exhibition with Kristin Hjellegjerde Gallery, considers art’s ability to not just challenge convention but to also present bold, new visions for the future.

For Stone, the creative process begins and ends with the material. He works with his hands, allowing his thoughts and feelings to organically filter through his gestures until a shape or form begins to emerge. The works possess a compelling sense of rawness and intimacy that unsettles the historic monumentality of sculpture and invites the viewer to form a more embodied, emotional connection to the work. The title of this latest exhibition refers to this process by personifying the notion of conflict. The knight – conventionally a masculine, heroic figure – is deconstructed in Stone’s work, appearing in brief glimpses of limbs that are then engulfed by swathes of coloured clay or marble. Still, we can also understand the tumultuous scenes as visual representations of psychological states or rather, transformation.

The show begins with the statue in the sea, depicting a figure and horse descending or ascending from the depths. The piece is a continuation of Stone’s recent works in which he wrapped abstracted fabric rendered from clay around the body of found horse statues to subvert ideas of power and masculinity. Still, here, both figure and animal have been absorbed back into the material. Whether or not this is perceived as a process of destruction or renewal is left for the viewer to decide. At the same time, however, it’s hard not to view the work through the lens of ongoing contemporary debates around the value or purpose of public art. ‘It seems to have become a very binary discussion, but what’s exciting is that we are now in a transitional space where we can actually talk about what we might want rather than what we do not like,’ says Stone, but inevitably, it is also a space of uncertainty, especially for a male sculptor. Stone plays with this idea by moving away from the elevated structure of a plinth to present, instead, a series of deeply framed tableaux, which invite the viewer to perceive the work as image or painting as well as an object. The fluid and richly coloured forms appear to warp and dissipate before the eye, disrupting our ability to ascertain, and more crucially, label what we see.

The piece entitled the bather, after Duncan Grant’s 1911 painting Bathing, plays further with our sense of perception as amorphous watery shapes, create an impression of an undulating motion. As the surface seems to shift, the viewer experiences an almost dizzying sensation that both confounds and liberates the gaze. Not all of the works are as abstract, however. A smaller-scale piece entitled lo! lonely horse, for example, comprises a tiny porcelain horse – a found object – set adrift in ceramic waves. ‘I made this work deliberately small to negate the idea of monument and especially the traditional, inflated masculine monument of the plinth and heroic ideal, represented by increasingly questionable heroes,’ comments Stone. ‘The biblical horses of the apocalypse, traditionally associated with dominant masculinity, are reduced to one, the lone horse lost in a sea of unknowing.’

Similarly, where the knight appears in the works, it is as a solitary figure, lost between waves or amongst the intertwined branches of trees. For Stone, like the ocean, the forest represents a transitional space rather than a specific geographical location or environment. The trees are abstracted to thick, muscular forms, creating a stunning impression of density that contrasts the softer, curvaceousness of the waves in the water-based works. Stone notes that he ‘wanted to draw on the idea of masculine and feminine energies but without setting them up as oppositional.’ Indeed, although the works convey distinct atmospheres, there is a strong visual relationship between the forms that create an impression of wholeness. This is perhaps most clearly expressed in a new bronze work entitled the ancient principle, which reimagines the traditional sculptural figure of mother and child in the more ambiguous form of a trinity of birds. Once again, the knight appears in glimpses as a softer, more fluid presence that has an almost omniscient quality as ‘a universal protector rather than a symbol of archaic masculinity.’

In the exhibition’s closing piece, Icarus and the sea, Stone draws on the Greek myth that Icarus flies too close to the sun, paying no heed to his father’s warnings. As a result, the wax of his makeshift wings melts, and he plummets to his death. However, in Stone’s sculptural retelling, Icarus, rather than drowning in the waves, is reclaimed by the sea (traditionally a female energy), relating to the notion of wholeness and circularity while also turning the original narrative on its head by offering an alternative, more uplifting perspective.

Amidst the continued tumult and uncertainty of contemporary existence, the knight divided invites us to seek solace in the creative potential of transitional periods – as a time of renewal and transformation.