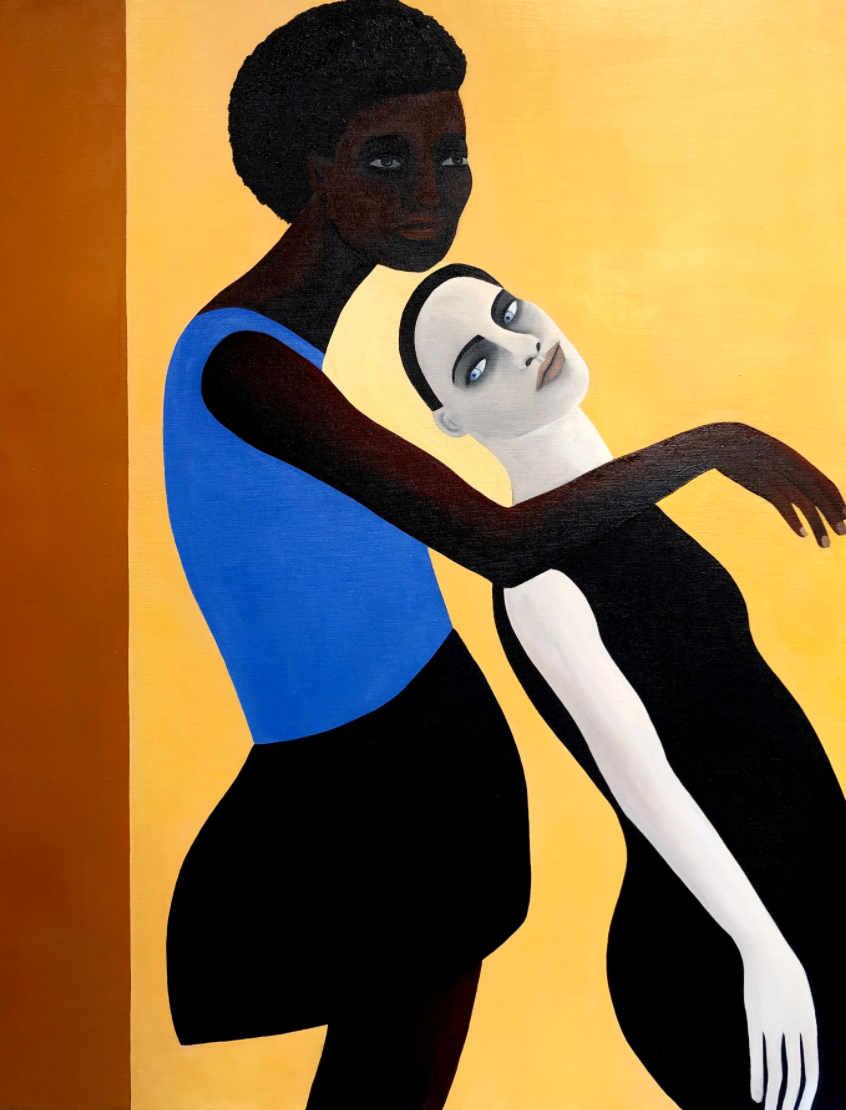 Thousands of faces flicker in and out of our field of vision as we move through the world, but some imprint themselves vividly into our minds as we imagine and ascribe stories onto the interactions that we witness. For her upcoming solo show Arrêt sur image at Kristin Hjellegjerde Gallery, London Bridge, Paris-based artist Rebecca Brodskis presents a series of arresting portraits that suspend time through both their making and their surreal composition. Amidst the rush and blur of contemporary life, these works appear hauntingly still and precise, allowing the viewer to enjoy a slower, deeper kind of contemplation.

Having grown up in a family of filmmakers, Brodskis cites cinema and particularly, the aesthetics of the twenties and thirties as a major influence on the evolution of her painting style. As such, there is a distinct elegance to her paintings whilst her characters often appear to have stepped out of another era with neat bob haircuts, block coloured clothing and sharply-defined silhouettes, posed with their heads tilted, hands on hip. And yet, despite the initial familiarity of the image, Brodskis’ scenes are difficult to locate within the ‘real’ world; the glossy, smooth backgrounds are suggestive of a neutralised, graphical space whilst the characters’ gaze is uniformly blank and unseeing. The work entitled Theodor, Jacob and I, for example, depicts three characters overlapping against an ochre background. Whilst their faces are shadowed and defined, there is spectral quality to their ashen skin tone as if they are fading from existence.

This evocation of mystery once again relates to cinema, and storytelling more generally, in which observation and the imagination collide to distort the natural order of things. ‘I like the idea that when you stop on a frame of the film, suddenly, that frame takes on the importance,’ she says. For Brodskis, painting has a similar effect, but whilst film reflects the movement of the eye, her portraits allow the image to unfold at a rhythm that opposes fast-paced consumption, and redirects perception. The slow, physical process of oil painting is visible in the precise lines and the considered choice of colours that add a sense of poetic balance to the composition.

Amongst the most intriguing of the portraits are those inspired by people with the skin pigment condition vitiligo. The artist recalls a particular week in Paris, when she kept passing people with vitiligo whom she ‘found so beautiful I had to paint them.’ In the resulting works – Theora and Above the difference – Brodskis has played with the background colours and skin tones to heighten the surrealism of the image whilst the choice of her subject reflects on the past and recent history of portraiture which typically prioritises conventional notions of beauty.

Many of Brodskis’ paintings reflect on the relationship between different generations, and in this series, there are several striking depictions of parenthood. Each of the paintings La paternite #1 and La paternite #2, for example, depicts a father holding onto the heel of his child who is curved over his head. As is typical of Brodskis’ work, the pose is purposefully playful and performative, and whilst the image is, in many ways, detached from reality, the physical closeness of father and child implies a sense of tenderness. In a similar way, hand gestures are also revealing of a deeper, emotional narrative in many of the paintings, imbuing the characters with a layer of subjectivity. In the painting entitled En attendant l’orage, for example, the mother’s hand grips the edge of the pale orange wall; the child on her shoulders balances one hand on the mother’s head while the other reaches for something beyond the canvas, in the distance.

In this way, the portraits, seemingly disconnected from their context, invite us to invent our own narratives much like we might imagine the lives of people we observe from a seat in a cafe or on a bus. Arrêt sur image is not only a collection of cinematic freeze frames, but also and perhaps more significantly, a series of beginnings.