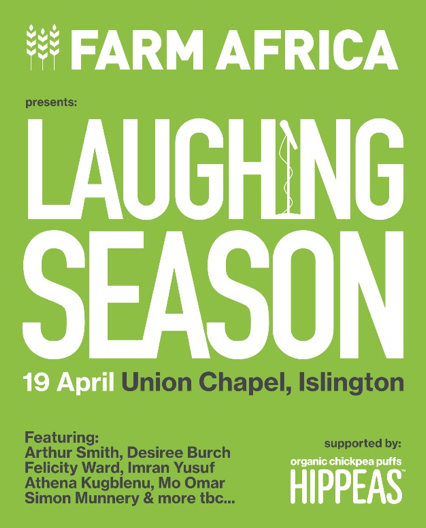 Farm Africa and HIPPEAS are proud to present their first ever comedy fundraiser, ‘Laughing Season’, where comedians from around the world will be taking the stage for a good laugh for a good cause!

The cream of the stand-up crop will be making an appearance, with stars from ‘Mock the Week’, ‘The Mash Report’, ‘Frankie Boyle’s American Autopsy’, ‘Have I Got News for You’ and ‘8 Out of 10 Cats’. The line-up includes Arthur Smith, Desiree Burch, Felicity Ward (MC), Imran Yusuf, Simon Munnery, Athena Kugblenu, Mo Omar and a surprise special guest!

Farm Africa is an international development charity, helping African farmers escape poverty by growing more and selling more. Poverty is widespread in sub-Saharan Africa, with more than 40% of the population living below the poverty line, surviving on incomes of less than $1.90 a day and Farm Africa is dedicated to helping grow incomes in a sustainable way. For every bag of HIPPEAS sold, the brand donates to Farm Africa to help support their incredible work. HIPPEAS is proud to support Farm Africa, working together to bring you ‘Laughing Season’ this April 19th, the event seeks to raise further awareness for Farm Africa’s causes, whilst spreading the peas, love and laughs.

Farm Africa is an innovative charity that reduces poverty by unleashing African farmers’ abilities to grow their incomes in an environmentally sustainable way. Farm Africa help farmers to not only boost yields, but also gain access to markets, while protecting the environment for generations to come.

Light and crunchy with a serious punch of protein and fibre, HIPPEAS™ are low-calorie, certified organic, certified gluten-free, vegan, and non-GMO. With less than 91 calories, 3 grams of fibre and 4 grams of protein per single-serve bag (22g), HIPPEAS™ are the new go-to snack choice for consumers who demand tasty snacks made with high-quality ingredients.

HIPPEAS™ are available in five far out flavors: Sweet and Smokin’, Salt & Vinegar Vibes, Cheese and Love, Far Out Fajita and In Herbs We Trust in the UK.

Launched in 2016, HIPPEAS quickly became the fastest growing free-from savoury snack brand in the UK and is now available in major retailers and has over 10,000 stockists. In 2017, the brand saw leading growth equity fund Strand Equity Partners and Leonardo DiCaprio invest in the brand.

Felicity Ward is star of ‘Live at the BBC’ and ‘Mock the Week’, and winner of the Best Newcomer at the Melbourne Fringe Festival. @felicityward
Arthur Smith, Britain’s favourite Grumpy Old Man and the Mayor of Balham, when not featuring on every Radio 4 programme ever, has had audiences laughing their socks off for decades with his riotous live shows. @arfursmith
Desiree Burch is star of BBC2’s ‘The Mash Report’, ‘Frankie Boyle’s American Autopsy’, and C4’s ‘8 Out of 10 Cats’ and winner of the Funny Women Award winner. @destheray
Simon Munnery is ‘one of the finest gag-writers in the business.’ According to The Guardian, Simon is an ‘absolute must-see for any comedy connoisseur’. @simonmunnery
Imran Yusuf was nominated as Edinburgh’s Best Newcomer and has starred in BBC3’s & Netlfix’s ‘Fried’, Michael McIntyre’s Comedy Roadshow, Dave’s One Night Stand and CBBC’s Ultimate Brain. @imranyusufcomedy
Athena Kugblenu is a 2017 nominee for the 99 Club Female Comedians’ Bursary and a former BBC New Comedy Award Finalist. She writes for BBC Radio 4 (News Quiz and The Now Show) and regularly records her stand-up for BBC Radio. @athenakugblenu
Mo Omar is winner of Leicester Square New Comedian Of the Year 2017 and Semi-Finalist in the So You Think You’re Funny & Amused Moose Semi-Finalist 2017. Somali-born, Cardiff-raised and London-based, Mo Omar brings in his third culture kid way of thinking.@mokultra
Photos of the comedians can be downloaded from: https://farmafrica.resourcespace.com/?c=1290&k=28a8a533c5

The London Library posted an update 5 days, 6 hours ago