Devil’s in the Detail 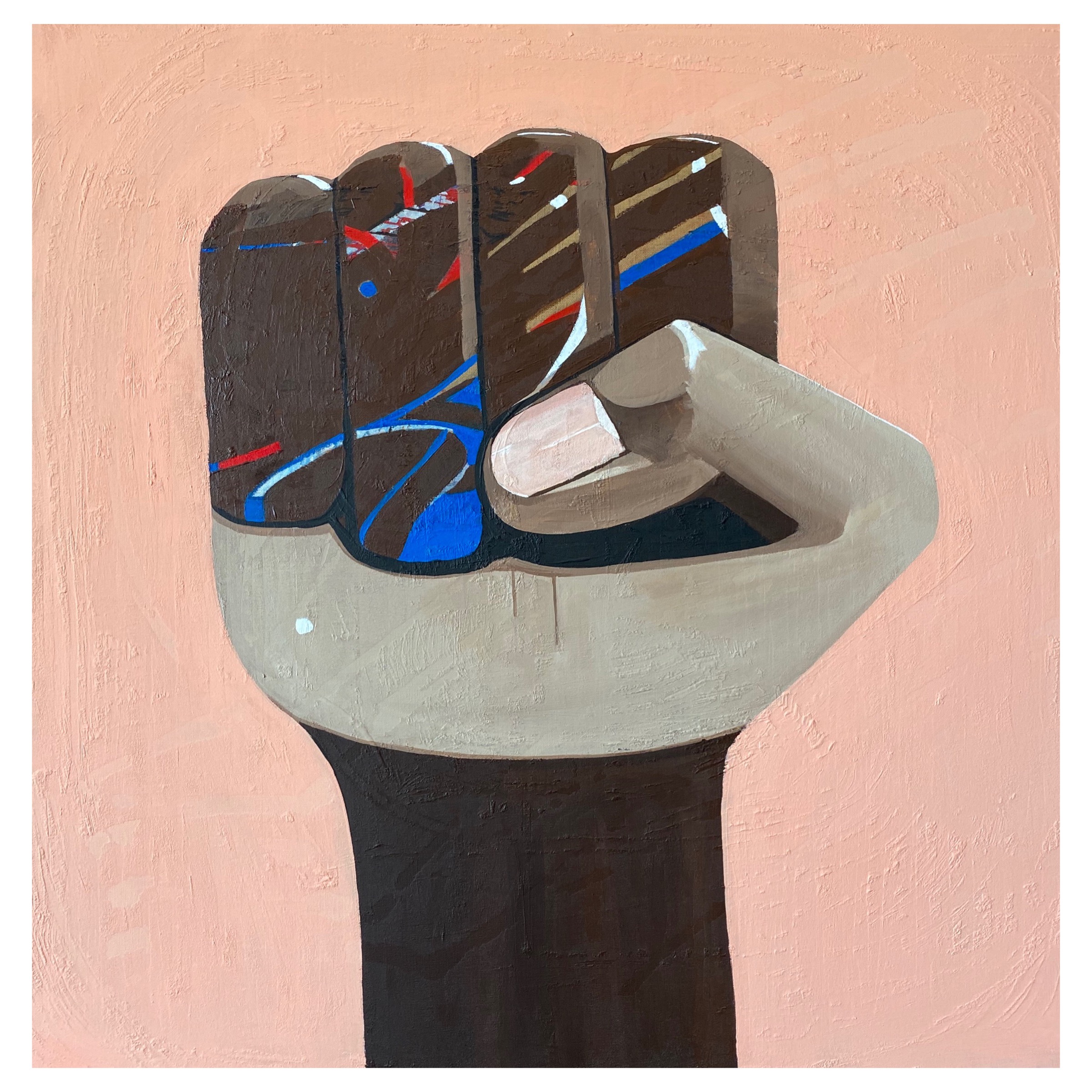 ‘Creativity is cultural not because it is derivative of it, but because it aims to heal culture. Art saturated with the unconscious acts like a compensatory dream in the individual: it tries to rebalance and address deep-rooted problems.’ – from Summer by Ali Smith

The latest group show at Kristin Hjellegjerde’s Wandsworth gallery in London brings together the work of 13 artists whose practices, though distinct, are engaging with our world, challenging our perceptions and reflecting the realities of our history, contemporary culture and society. Devil’s in the Detail is an exhibition that celebrates creativity: the ambiguous, the strange, the various and the bold.

In October 1968 at the Mexico City Olympics medal ceremony, Tommie Smith and John Carlos raised their fists in a powerful symbol of solidarity that has endured and evolved through generations. In his latest series of vibrant paintings, Los Angeles-based artist Forrest Kirk references this gesture within the context of the recent and ongoing Black Lives Matter demonstrations across the globe. Rendered in a strikingly bold graphical style, the paintings serve as eternal portraits of hope and continued strength. By contrast, Iranian artist Soheila Sokhanvari’s practice is often preoccupied with the reverberations of “historical amnesia”, in which a culture experiences collective memory loss due to a traumatic act in the past. Her ongoing series of paintings entitled MKUltra focuses upon a program of drug experiments that were designed and undertaken by the CIA between 1953 and 1973. Prostitutes were employed by the government to lure unsuspecting men into CIA ‘safe houses’ where they were given high doses of psychoactive drugs such as LSD and monitored for changes in their behaviour. Taking the prostitutes as her subject, Sokhanvari not only reimagines the scenes in the present moment, but also raises pertinent questions around accountability and objectification.

Born in Morocco to a Syrian father and a Swiss mother, Houda Terjuman describes her status as a ‘hybrid migrant’ as crucial to the evolution of her artistic language. Her surreal, poetic paintings and sculptures, which often appear floating or detached, are each imbued with strong emotional and narrative significance. ‘These small objects act as bearers of hope and bridges making the link between cultures,’ says the artist. ‘An empty chair symbolises what we left behind and keeps us connected to our roots; a lonely boat is a bearer of hope; a floating bridge invites us to build connections and empathy towards the unknown.’ In a similar way, Simón Arrebola creates imaginative visual narratives that encompass many different elements often drawn from the artist’s own autobiographical experiences and memories. However, for this exhibition, he responds to another artist’s exploration of self. Based on Virginia Woolf’s novel Orlando: A Biography, which parallels much of the author’s own life through fiction, each of Arrebola’s paintings reimagine the protagonist anew, representing the fluidity that Woolf evokes in relation to conventional gender stereotypes and identity more generally.

Karachi-based artist Rabia Farooqui also assembles objects and characters to build a sense of narrative intrigue. The artist compares her compositions to a theatrical stage on which she sets up complex interactions, creating humorous and often bizarre scenes that seek to reveal the absurdity of cultural and societal expectations placed on the individual. Lincoln Mwangi similarly draws on the symbolism of objects as an expression of identity and underlying emotion. The Kenya-based artist’s mixed-media figurative works are inspired by his daily life encounters, often depicted in a haunting monochromatic colour palette that creates an unsettling sense of disunity.

South African artist Kimathi Mafafo’s practice encompasses a broad range of mediums including embroidery, oil painting and installation. Typically depicting women in lush, verdant tropical landscapes, Mafafo’s imagery is guided by her desire to celebrate the black female form, inspiring women to embrace their worth and beauty in opposition to traditional prescribed gender roles. Similarly, Ghana-based artist Rufai Zakari seeks to celebrate the strength and versatility of women. Stitching together plastic bags, food packages and plastic bottles found on the streets, the artist creates vibrant, textural scenes that reposition women as the subjects of their own narratives whilst at the same time examining consumerism, environmental pollution, labour, trade, and the impacts of industrialisation in contemporary Ghanaian society.

Tuesday Riddell’s latest works are inspired by the 17th century sub-genre of sottobosco painting made famous by Dutch artist Otto Marseus van Schrieck, who depicted scientific, ground level observations of forest floor creatures and flora. Employing the ancient craft of japanning, a 17th century form of decorative finish characterised by black lacquer gilded with gold and silver leaf, Riddell creates magical, nocturnal scenes that capture the unseen metamorphosis and growth of the micro world below the trees. London-based artist Rene Gonzalez also takes nature as his subject. Whilst his earlier paintings often featured characters or human structures, these new works depict largely uninhabited, eerily beautiful landscapes that possess both a sense of quiet stillness and an atmosphere of underlying danger. ‘It’s probably no coincidence that this subject matter has taken centre stage in my practice as global warming and the decimation of wildlife and forests is at the highest level we’ve ever seen,’ says the artist.

For this exhibition, London-based artist Kate MccGwire presents LIMINAL, a mixed media sculpture made from goose feathers, encased in a bespoke oak cabinet. Like much of the artist’s work, the mysterious, writhing serpentine form plays with opposites – beauty and repulsion, movement and constraint, nature and artifice – to challenge our perceptions and encourage deeper engagement with the object. Also interested in the way that we respond to and perceive our environments, Korean artist Minyoung Choi’s painted scenes are often the result of deep, meditative observation conflated with memory and the imagination. Her latest works Desk 2 and Aquarium are preoccupied with the mundane and yet, these familiar objects – clocks, books, fish tanks – are seen through a strange, semi-fluorescent lens that evokes a sense of magic and unreality. In this way, we are invited to consider how our own subjectivity and imagination may colour our perspectives.

British-Pakistani artist Khushna Sulaman-Butt’s practice is also preoccupied with the gaze, specifically in relation to body language and how that might affect the way we that behave or respond to another person or situation. Acknowledging her position of relative power as a portrait artist, she grants her sitters the freedom to choose how they dress and pose so that they have the opportunity ‘to reclaim their identity, sexuality, religion and the values they place upon themselves.’ As a result, the paintings are highly dynamic and original, harnessing portraiture’s ability to be both evocative and confrontational.

Bringing together diverse artistic practices, Devil’s in the Detail demonstrates art’s ability to disrupt the norm by exposing the narrowness of assumed perspectives, whilst at the same time offering us the freedom to envision bold, new worlds and ways of being.